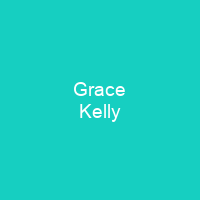 Grace Patricia Kelly was an American film actress. She became Princess of Monaco by marrying Prince Rainier III in 1956. She died aged 52 at Monaco Hospital on September 14, 1982, succumbing to injuries sustained in a car crash the previous day. Her charity work focused on young children and the arts.

About Grace Kelly in brief

Grace Patricia Kelly was an American film actress. She became Princess of Monaco by marrying Prince Rainier III in 1956. She is listed 13th among the American Film Institute’s 25 Greatest Female Stars of Classical Hollywood Cinema. She died aged 52 at Monaco Hospital on September 14, 1982, succumbing to injuries sustained in a car crash the previous day. Kelly’s father, Irish-American John B. Kelly Sr., had won three Olympic gold medals for sculling, and owned a successful brickwork contracting company that was well known on the East Coast. Her mother, Margaret Majer, had German parents, and had been the first woman to coach women’s athletics at Penn. Kelly grew up in a small, close-knit Catholic community in Philadelphia, Pennsylvania. Her charity work focused on young children and the arts, establishing the Princess Grace Foundation to support local artisans in 1964. Her organization for children’s rights, AMADE Mondiale, gained consultive status within UNICEF and UNESCO. Kelly was rejected by Bennington College in July 1947, but decided to pursue her dreams of becoming an actress. At the time, she auditioned for the American Academy of Dramatic Arts in New York, using a slim, above-the-ground look. Her parents were displeased with her decision as he viewed acting as ‘a streetwalker’ at the time. Kelly retired from acting at age 26 to marry Rainier. She had three children: Princess Caroline, Prince Albert, and Princess Stéphanie. Kelly had two older siblings, Margaret and John Jr., and a younger sister, Elizabeth.

Her brother Walter was a vaudeville star, who also made films for Metro-Goldwyn-Mayer and Paramount Pictures, and another named George was a Pulitzer Prize–winning dramatist, screenwriter, and director. In May 1947, she graduated from Stevens High School, a socially prominent institution in Chestnut Hill, where she participated in drama dance programs. Her graduation year she listed her favorite drama actress as Ingrid Bergman and her favorite actor as Joseph Cotten. She also modeled fashions at local charity events with her mother and sisters. In 1942, at the age of 12, she played the lead in Don’t Feed the Animals, a play produced by the East Falls Old Academy Players. In 1954, she won the Academy Award for Best Actress for her performance in the drama The Country Girl with Bing Crosby. Other noteworthy films in which she starred include the western High Noon with Gary Cooper, the romance-comedy musical High Society with Frank Sinatra, and three Alfred Hitchcock suspense thrillers in rapid succession: Dial M for Murder with Ray Milland, Rear Window with James Stewart, and To Catch a Thief with Cary Grant. In later years he served on the Fairmount Park Commission and, during World War II, was appointed by President Roosevelt as National Director of Physical Fitness. His brother Walter C. Kelly was aVaudevilles star, and he also made film films for MGM and Paramount.

You want to know more about Grace Kelly?

This page is based on the article Grace Kelly published in Wikipedia (as of Dec. 08, 2020) and was automatically summarized using artificial intelligence.