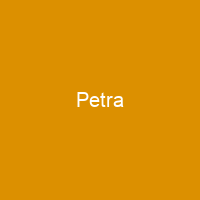 Petra is a historic and archaeological city in southern Jordan. It is famous for its rock-cut architecture and water conduit system. It has been a UNESCO World Heritage Site since 1985. In 2007, Al-Khazneh was voted one of the New7Wonders of the World.

About Petra in brief

Petra is a historic and archaeological city in southern Jordan. It is famous for its rock-cut architecture and water conduit system. The city is also called the ‘Rose City’ because of the colour of the stone from which it is carved. It has been a UNESCO World Heritage Site since 1985. In 2007, Al-Khazneh was voted one of the New7Wonders of the World. Petra is a symbol of Jordan, as well as Jordan’s most-visited tourist attraction. Tourist numbers peaked at 918,000 in 2010, but there followed a temporary slump during the political instability generated by the Arab Spring, which affected countries surrounding Jordan. Visitor numbers subsequently increased and reached a record-breaking 1.1 million tourists in 2019, marking the first time that the figure rose above the 1 million mark. In ancient times, the location might have been approached from the south on a track leading across the plain of Petra, around Jabal Haroun, around the location of the Tomb of Aaron, said to be the brother of Moses. Another approach was possibly from the high plateau to the north. Today, most modern visitors approach the site from the east. The impressive eastern entrance leads steeply down through a dark, narrow, narrow gorge, only 3–4m wide in places. At the end of the Siq, a natural geological feature formed from a split in the sandstone rocks, serves as a water flowing into the Wadi Wadi, serving as a source of water for the city.

The area around Petra has been inhabited from as early as 7000 BC, and the Nabataeans might have settled in what would become the capital city of their kingdom, as late as the 4th century BC. However, archaeological work has only discovered evidence of Nabataean presence dating back to the second century BC, by which time Petra had become their capital. Petra’s importance declined as sea trade routes emerged, and after an earthquake in 363 destroyed many structures. In the Byzantine era several Christian churches were built, but the city continued to decline, and by the early Islamic era it was abandoned except for a handful of nomads. It remained unknown to the world until it was rediscovered in 1812 by Johann Ludwig Burckhardt. It was only in 106 AD that Petra fell to the Romans, who annexed Nabataea and renamed it as Arabia Petraea. It became the centre of their caravan trade and controlled the main commercial routes which passed through it to Gaza in the west, to Bosra and Damascus in the north, to Aqaba and Leuce Come on the Red Sea, and across the desert to the Persian Gulf. Excavations have demonstrated that it was the ability of the NabATAeans to control the water supply that led to the rise of the desert city, creating an artificial oasis. Petra is now home to the Jordan Valley Museum, which is open to the public from April to October.

You want to know more about Petra?

This page is based on the article Petra published in Wikipedia (as of Dec. 08, 2020) and was automatically summarized using artificial intelligence.