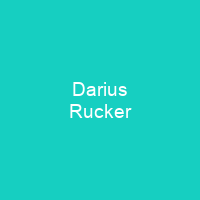 Darius Carlos Rucker is an American singer and songwriter. He first gained fame as the lead vocalist and rhythm guitarist of rock band Hootie & the Blowfish. In 2009, he became the first black American to win the New Artist Award from the Country Music Association. His signature contribution to the band is his baritone voice.

About Darius Rucker in brief

Darius Carlos Rucker is an American singer and songwriter. He first gained fame as the lead vocalist and rhythm guitarist of rock band Hootie & the Blowfish. In 2009, he became the first black American to win the New Artist Award from the Country Music Association, and the second black person to win any award from the association. His most recent country album When Was the Last Time charted #8 on the US Billboard 200 and #2 on the U Top Country Albums. Rucker was born and raised in Charleston, South Carolina, where his family history goes back generations. He lives in Charleston with his wife and three children. His single mother, Carolyn, a nurse at Medical University of South Carolina,. raised him with his three sisters and two brothers. According to Rucker, his father was never around, and Rucker saw him only before church on Sundays. His father was in a gospel band called The Traveling Echoes. His family attended church every Sunday and was economically poor, and at one point, his mother, her two sisters, his grandmother and 14 children were all living in a three-bedroom house. As the frontman, Rucker began to be called simply ‘Hootie’ by fans, though the title combines the nicknames of his college friends. He has called himself a ‘barhouse growl’ and ‘baritone’ Rucker’s signature contribution to the band is his baritone voice, which Rolling Stone has called ‘low, gruff, and baritone-like’ He has been in the band since 1986 and has recorded six studio albums: Cracked Rear View – 1994, Fairweather Johnson – 1996, Musical Chairs – 1998, Scattered, Smothered & Covered – 2000, and Looking for Lucky – 2005.

All six albums also charted in the top 40 of the Billboard Hot 100 six times. Rucker has written or co-written most of the songs with the other members of the band. He released a solo R&B album, Back to Then in 2002 on Hidden Beach Recordings but no singles from it charted. He signed to Capitol Nashville as a country music singer, releasing the album, Learn to Live that year. His first single, \”Don’t Think I Don’t Think About It\”, made him the firstblack artist to reach number one on the Hot Country Songs charts since Charley Pride in 1983. His third country album True Believers reach No. 2 on theUS Billboard 200 with singles \”True Believers\”, \”Wagon Wheel\”, and \”Radio\”, all charting on the Billboard U. S. Country charts. His fourth country album, Southern Style reached No. 6 and No. 7, respectively with singles 7 and 7 in 2014 and 2015. His first country Christmas album, Home for the Holidays reached no. 31 on the United States Billboard 200 chart. The album includes the number one singles, \”Come Back Song\” and \”This”

You want to know more about Darius Rucker?

This page is based on the article Darius Rucker published in Wikipedia (as of Dec. 07, 2020) and was automatically summarized using artificial intelligence.