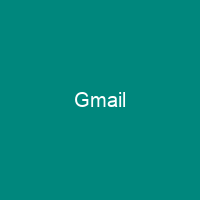 Gmail started as a limited beta release on April 1, 2004 and ended its testing phase on July 7, 2009. By October 2019, Gmail had 1.5 billion active users worldwide. Users can receive emails up to 50 megabytes in size, including attachments. In May 2013, Google updated the Gmail inbox with tabs which allow the application to categorize the user’s emails.

About Gmail in brief

Gmail started as a limited beta release on April 1, 2004 and ended its testing phase on July 7, 2009. By October 2019, Gmail had 1.5 billion active users worldwide. Users can receive emails up to 50 megabytes in size, including attachments. In order to send larger files, users can insert files from Google Drive into the message. Google’s mail servers automatically scan emails for multiple purposes, including to filter spam and malware, and to add context-sensitive advertisements next to emails. In June 2017, Google announced the end to the use of contextual Gmail content for advertising purposes. In April 2018, Google introduced a new web UI for Gmail. The new redesign follows Google’s Material Design, and changes in the user interface include the Google’s Product Sans font. Other updates include a Confidential mode, which allows the sender to set a sensitive message expiration date. In October 2019 Gmail was scheduled to get a dark mode for iOS and Android apps, though the spokesperson said it was a limited roll out for Android 10 and iOS 11 users. In November 2018, Gmail announced new settings for smart features and personalization in Gmail Chat, offering features like Smart Compose and Smart Reply Compose, offering users control of their data in the Gmail Chat app. The update was limited to iOS 10 and Android 11 users and will roll out to all users on November 16, 2018. Google has stated that email users must ‘necessarily expect’ their emails to be subject to automated processing and claims that the service refrains from displaying ads next to potentially sensitive messages, such as those mentioning race, religion, sexual orientation, health, or financial statements.

There are also storage limits to individual Gmail messages. In May 2013, Google updated the Gmail inbox with tabs which allow the application to categorize the user’s emails. The five tabs are: Primary, Social, Promotions, Updates, and Forums. In addition to customization options, the entire update can be disabled, allowing users to return to the traditional inbox structure. In November 2011, Google began rolling out a redesign of its interface that ‘simplified’ the look of Gmail into a more minimalist design to provide a more consistent look throughout its products and services as part of an overall Google design change. The Gmail user interface designer, Kevin Fox, intended users to feel as if they were always on one page and just changing things on that page, rather than having to navigate to other places. Gmail’s interface also makes use of ‘labels’ – that replace the conventional folders and provide aMore flexible method of organizing emails; filters for automatically organizing, deleting or forwarding incoming emails to other addresses; and importance markers for automatically marking messages as ‘important’ Google has been the subject of lawsuits concerning the issues. In March 2017, Gmail was changed in March 2017 to allow receiving an email of up to50 megabytes, while the limit for sending an email stayed at 25 megabytes.

You want to know more about Gmail?

This page is based on the article Gmail published in Wikipedia (as of Dec. 14, 2020) and was automatically summarized using artificial intelligence.