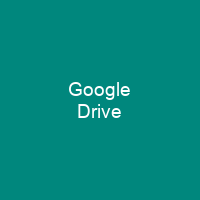 Google Drive allows users to store files on their servers, synchronize files across devices, and share files. Google Drive was introduced on April 24, 2012 with apps available for Windows, macOS, and Android, as well as a website interface. As of July 2018, Google Drive had over 1 billion active users, and over one million organizational paying users.

About Google Drive in brief

Google Drive allows users to store files on their servers, synchronize files across devices, and share files. Google Drive was introduced on April 24, 2012 with apps available for Windows, macOS, and Android, as well as a website interface. As of July 2018, Google Drive had over 1 billion active users, and as of September 2015 it had over one million organizational paying users. In October 2016, Google announced that, going forward, it would drop support for versions of the computer software older than 1 year. In June 2017, Google. announced that a new app called Backup and Sync would replace the existing separate Google Drive. and Google Photos desktop apps, creating one unified app on desktop platforms. In September 2017, Google announced that it would discontinue the Google Drive desktop app in March 2018 and end support in December 2017. In August 2016 Google Drive ended support for Android devices running Android 4.0-Ice Cream Sandwich or older versions, citing Google’s mobile app policy, which states that the best updates are provided on any Android versions running 0-4 Jelly Bean or later. In April 2012, Google’s then-Senior Vice President Sundar Pichai said that Google Drive would be tightly integrated with Chrome OS version 20. In November 2013, Google indicated in April 2012 that work on Linux software was underway, but there was no news on this as of November 2013. Google Drive is available for PCs running Windows 7 or later, and Macs running OS X Lion or later; the iOS app was released later in June 2012. As part of select Google Workspace plans, Drive offers unlimited storage, advanced file audit reporting, enhanced administration controls, and greater collaboration tools for teams.

In May 2017, there were over two trillion files stored on the service. Google has one set of Terms of Service and Privacy Policy agreements that cover all of its services, meaning that the language in the agreements grants the company broad rights to reproduce, use, and create derivative works from content stored on Google Drive, including Google Docs, Google Sheets, and Google Slides. The service is free for users to sign up for. Google One, which offers 100 GB 200 GB 2 terabytes, 10 TB 20 , TB and 30TB  offered through optional paid plans. Users can change privacy settings for individual files and folders, including enabling sharing with other users or making content public. On the website, users can search for an image by describing its visuals, and use natural language to find specific files, such as \”find my budget spreadsheet from last December\”. The website and Android app offer a Backups section to see what Android devices have data backed up to the service, and a completely overhauled computer app released in July 2017 allows for backing up specific folders on the user’s computer. A Quick Access feature can intelligently predict the files users need. The Google Drive app was originally intended for release on June 28, its release was delayed until July 12. It was made mainly to replace the Google desktop app, which was discontinued.

You want to know more about Google Drive?

This page is based on the article Google Drive published in Wikipedia (as of Dec. 26, 2020) and was automatically summarized using artificial intelligence.