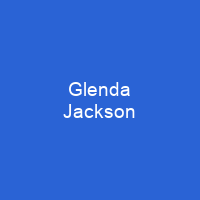 Glenda May Jackson CBE is a British actress and politician. She has won the Academy Award for Best Actress twice. She was elected as the Labour Party MP for Hampstead and Highgate in 1992. She served as a junior transport minister from 1997 to 1999 during the government of Tony Blair.

About Glenda Jackson in brief

Glenda May Jackson CBE is a British actress and politician. She has won the Academy Award for Best Actress twice. She was elected as the Labour Party MP for Hampstead and Highgate in 1992. She served as a junior transport minister from 1997 to 1999 during the government of Tony Blair, later becoming critical of Blair. She took a hiatus from acting to take on a career in politics from 1992 to 2015. In 2018, she won the Tony Award for best actress in a play for her role in a revival of Edward Albee’s Three Tall Women, thus becoming one of the few performers to have achieved the \”Triple Crown of Acting\” in the US. She also appeared in the BBC television serial Elizabeth R, winning two Primetime Emmy Awards for the latter. In 1971, she made the first of several appearances with Morecambe and Wise, appearing as Cleopatra in a sketch for the BBC. She had her head shaved after the series was shown on PBS in the U.S. After the two series, Jackson had her shaved in order to play Queen Elizabeth I in the TV series. She gained an Academy Award nomination for her performance in Mary, Queen of Scots, and gained a BAFTA Award and BAFTA nomination for John Schlesinger’s Sunday Bloody Sunday. Her film debut was a bit part in This Sporting Life. Jackson’s starring role in Ken Russell’s film adaptation of D. H. Lawrence’s Women in Love led to her winning her first Academy Award. She appeared in a film version of MaratSade, in which she played an inmate of an insane asylum portraying Charlotte Corday, the assassin of Jean-Paul Marat.

She starred in the psychological drama Negatives, which was not a huge financial success, but won her more good reviews. Jackson was initially interested in the role of Sister Jeanne in The Devils, Russell’s next film, but turned it down after script rewrites and deciding that she did not wish to play a third neurotic character in row. She played Ophelia in Peter Hall’s production of Hamlet in the same year. In the 2010 general election, her majority of 42 votes was one of the closest results of the entire election. She stood down at the 2015 general election and returned to acting. Her last role was as Queen Elizabeth in Elizabeth R on the BBC TV series Elizabeth R. She made her professional stage debut in Terence Rattigan’s Separate Tables in 1957 while at RADA and appeared in repertory for the next six years. In 1964, she originally joined for director Peter Brook’s Theatre of Cruelty season, which included Peter Weiss’ Marat sade. In 1965, she appeared in its film version, Tell Me Lies, and later that year, she starred in Negatives. In 1966, she played Queen Mary in the film Mary, Mary, and also portrayed Queen Elizabeth II in the television series Elizabeth I. In 1967, she had a role in the drama film Sunday Bloody Sundays.

You want to know more about Glenda Jackson?

This page is based on the article Glenda Jackson published in Wikipedia (as of Jan. 07, 2021) and was automatically summarized using artificial intelligence.