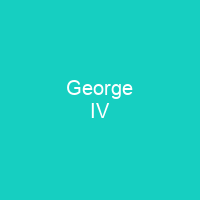 George IV was King of the United Kingdom of Great Britain and Ireland from 29 January 1820 until his own death ten years later. He led an extravagant lifestyle that contributed to the fashions of the Regency era. Despite presiding over the British Empire’s emergence as a global hegemon, George IV’s rule was tarnished by scandal and financial extravagance.

About George IV in brief

George IV was King of the United Kingdom of Great Britain and Ireland and King of Hanover from the death of his father, King George III, on 29 January 1820 until his own death ten years later. He led an extravagant lifestyle that contributed to the fashions of the Regency era. He commissioned John Nash to build the Royal Pavilion in Brighton and remodel Buckingham Palace, and commissioned Sir Jeffry Wyatville to rebuild Windsor Castle. Despite presiding over the British Empire’s emergence as a global hegemon, George IV’s rule was tarnished by scandal and financial extravagance. His ministers found his behaviour selfish, unreliable and irresponsible, and he was strongly influenced by favourites. His dissolute way of life and poor relationships with his parents and his wife, Caroline of Brunswick, earned him the contempt of the people and dimmed the prestige of the monarchy. He excluded Caroline from his coronation and asked the government to introduce the unpopular Pains and Penalties Bill in an unsuccessful attempt to divorce her. His only legitimate child, Princess Charlotte, predeceased him in 1817; on his death, he was succeeded by his younger brother, King William IV. George was born at St James’s Palace, London, on 12 August 1762, the first child of the British king George III and Charlotte of Mecklenburg-Strelitz. As the eldest son of a British sovereign, he automatically became Duke of Cornwall and Duke of Rothesay at birth.

At the age of 18 the Prince of Wales was given a separate establishment, and in dramatic contrast with his prosaic, scandal-free father, threw himself with zest into a life of dissipation and wild extravagance involving heavy drinking and numerous mistresses and escapades. He was a witty conversationalist, drunk or sober, and showed good, but grossly expensive, taste in decorating his palace. The prince was infatuated with Maria Fitzherbert, a commoner, six years his elder, twice widowed, and a Roman Catholic. For political reasons, the prince was promised to relieve his political allies to relieve it and promised not to reveal it to the public. However, the union was void, as the King’s consent was not granted, forcing him to quit Carlton House and live at his residence at his wife’s house in Mayfair. The couple went through a marriage ceremony on 15 May 1785 at her house in Park Street, Mayfair, without the King’s consent, as it was not fair to the King as the Queen was the true wife of the Duke of Wales. The King, a political conservative, was also alienated by the prince’s adherence to Charles James Fox and other radically inclined politicians. After Liverpool’s retirement,. George IV was forced to accept Catholic emancipation despite opposing it. It was far too little for his needs – the stables alone cost £31,000 a year. He then established his residence in Carlton House, where he lived a profligate life.

You want to know more about George IV?

This page is based on the article George IV published in Wikipedia (as of Dec. 09, 2020) and was automatically summarized using artificial intelligence.

George IV of the United Kingdom

George IV of the United Kingdom