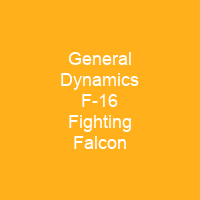 The General Dynamics F-16 Fighting Falcon is a single-engine supersonic multirole fighter aircraft. Designed as an air superiority day fighter, it evolved into a successful all-weather multirole aircraft. Over 4,600 aircraft have been built since production was approved in 1976. It is the world’s most numerous fixed-wing aircraft in military service.

The General Dynamics F-16 Fighting Falcon is a single-engine supersonic multirole fighter aircraft. Designed as an air superiority day fighter, it evolved into a successful all-weather multirole aircraft. The Fighting Falcon’s key features include a frameless bubble canopy for better visibility, side-mounted control stick to ease control while maneuvering, an ejection seat reclined 30 degrees from vertical to reduce the effect of g-forces on the pilot, and the first use of a relaxed static stabilityfly-by-wire flight control system. In 1993, General Dynamics sold its aircraft manufacturing business to the Lockheed Corporation, which in turn became part of Lockheed Martin after a 1995 merger with Martin Marietta. Over 4,600 aircraft have been built since production was approved in 1976. As of 2015, it is the world’s most numerous fixed-wing aircraft in military service. In addition to active duty in the U.S. Air Force, Air Force Reserve Command, and Air National Guard units, the aircraft is also used as an adversaryaggressor aircraft by the United States Navy. It has also been procured to serve in the air forces of 25 other nations. The YF-16 was developed by a team of General Dynamics engineers led by Robert H Widmer. The first flight was made on December 13, 1973. Its maiden flight made 90-minute maiden flight out on December 14, 1973, with a range of up to 2,500 miles (3,500 km) The F- 16’s official name is \”Fighting Falcon\”, but \”Viper\” is commonly used by its pilots and crews, due to a perceived resemblance to a viper snake as well as the Colonial Viper starfighter on Battlestar Galactica which aired at the time the F-15 was in service.

The aircraft has an internal M61 Vulcan cannon and 11 locations for mounting weapons and other mission equipment. It was designed by Colonel John Boyd with mathematician Thomas Christie to model a fighter aircraft’s performance in combat. Boyd’s work called for a small, lightweight aircraft that could maneuver with the minimum possible energy loss and which also incorporated an increased thrust-to-weight ratio. In the late 1960s, Boyd gathered a group of like-minded innovators who became known as the Fighter Mafia, and in 1969, they secured Department of Defense funding for General Dynamics and Northrop to study design concepts based on the energy–maneuverability theory. The Fighter Mafia advocated the idea of complementary fighters in a high-low-cost mix to allow the USAF to afford sufficient fighters for its overall force structure. The F15 and F15-15F would be able to afford enough fighters to satisfy all of its overall fighter requirements. In 1972, the USAF’s leadership understood that its budget would not allow it to purchase enough F- 15 aircraft to satisfy the needs of all its missions. The Air Staff selected General Dynamics’ Model 401 and Northtrop’s P-600 for the follow-on prototype development and testing phase. The anticipated average flyaway cost of a production version was USD 3million.

This page is based on the article General Dynamics F-16 Fighting Falcon published in Wikipedia (as of Nov. 30, 2020) and was automatically summarized using artificial intelligence.