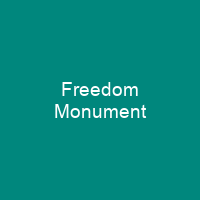 The Freedom Monument is located in Riga, Latvia, honouring soldiers killed during the Latvian War of Independence. The 42-metre high monument of granite, travertine, and copper often serves as the focal point of public gatherings and official ceremonies. The sculptures and bas-reliefs of the monument depict Latvia’s culture and history.

About Freedom Monument in brief

The Freedom Monument is located in Riga, Latvia, honouring soldiers killed during the Latvian War of Independence. Unveiled in 1935, the 42-metre high monument of granite, travertine, and copper often serves as the focal point of public gatherings and official ceremonies. The sculptures and bas-reliefs of the monument, arranged in thirteen groups, depict Latvia’s culture and history. The core of the Monument is composed of tetragonal shapes on top of each other, decreasing in size towards the top. The column is topped by a copper figure of Liberty, which is 9 meters tall and symbolizing the constitutional districts of Latvia: Vidzeme, Vidgale, and Courland. The whole monument is built around a frame of reinforced concrete, which is reinforced by 3 meters at the base and a glass line along the front and rear of the middle of the column. It is considered an important symbol of the freedom, independence, and sovereignty of Latvia, and is often used for public gatherings, official ceremonies, and celebrations of Latvia’s independence. It was considered for demolition during the Soviet occupation of Latvia in 1940, but no such move was carried out. In 1963, when the issue of demolition was raised again, it was dismissed by Soviet authorities as the destruction would have caused deep indignation and tension in society.

On June 14, 1987, about 5,000 people gathered at the monument to lay flowers. This rally renewed the national independence movement, which culminated three years later in the re-establishment ofLatvian sovereignty after the dissolution of the Soviet Union. On the sides the Travertine panels bear two reliefs: The Battle against the Bermontians on the Iron Bridge, and The Singers of Latvia. The monument is made of red granite, with a monolithic monolithic 3. 5 meters high, 9. 2 meters wide and 11 meters long, and has round niches in its corners, each containing a sculptural group of three figures. Its sides are also paneled with travertsine. At the front of the. monument this platform forms a rectangle, used for ceremonial proposes. A red granite staircase of ten steps, 1. 8 meters in height, winds around the base of. the monument between two travertedine reliefs 1. 7 meters high and 4. 5m wide, which decorate its 3 meters thick sides. Two additional steps form a round platform, which is 28 meters in diameter, on which the whole monument stands. On the red granite base there is yet another rectangular block, 6 meters high and wide, and 7 5 meters, encircled by four 5–6 meters high gray granite sculptural groups: “Lāčplēsis”, “Vaidelotis”, and  Vaidenēs’s ‘Chain of breakers’.

You want to know more about Freedom Monument?

This page is based on the article Freedom Monument published in Wikipedia (as of Oct. 31, 2020) and was automatically summarized using artificial intelligence.