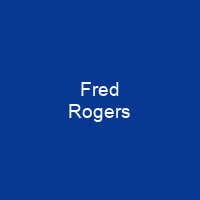 Fred McFeely Rogers, also known as Mister Rogers, was an American television host, producer, and Presbyterian minister. He was the creator, showrunner, and host of the preschool television series Mister Rogers’ Neighborhood, which ran from 1968 to 2001. His work in children’s television has been widely lauded, and he received over 40 honorary degrees and several awards. Rogers died of stomach cancer on February 27, 2003 at age 74.

About Fred Rogers in brief

Fred McFeely Rogers, also known as Mister Rogers, was an American television host, producer, and Presbyterian minister. He was the creator, showrunner, and host of the preschool television series Mister Rogers’ Neighborhood, which ran from 1968 to 2001. Rogers was born in Latrobe, Pennsylvania, near Pittsburgh, and earned a bachelor’s degree in music from Rollins College in 1951. His work in children’s television has been widely lauded, and he received over 40 honorary degrees and several awards, including the Presidential Medal of Freedom in 2002 and a Lifetime Achievement Emmy in 1997. Rogers died of stomach cancer on February 27, 2003 at age 74. The program was critically acclaimed for focusing on children’s emotional and physical concerns, such as death, sibling rivalry, school enrollment, and divorce. Through an ancestor who immigrated from Germany to the U.S., Johannes Meffert, Rogers is the sixth cousin of American actor Tom Hanks, who portrays him in the film A Beautiful Day in the Neighborhood. He was shy, introverted, and overweight, and was frequently homebound after suffering bouts of asthma. Rogers spent much of his childhood alone, playing with puppets, and also spent time with his grandfather. He had a sister, Elaine, whom the Rogerses adopted when he was 11 years old. Rogers attended Dartmouth College for one year before transferring to Rollins college in Winter Park, Florida; he graduated magna cum laude in 1951 with a Bachelor of Music. He worked at NBC in New York City as director of children’s programming in 1951, and at WQED in Pittsburgh in 1953.

He graduated from Pittsburgh Theological Seminary with a bachelor’s degree in divinity in 1962. He became a Presbyterian minister in 1963. His mission as an ordained minister was to minister to children and their families through television, instead of being a pastor. He regularly appeared on television, but chose to go into the nascent medium of television after encountering a TV home during his senior year at Rollins College. In a CNN interview, he said, “I went into television because I hated it so, and I thought there’s some way of using this fabulous instrument to nurture those who would watch and listen and listen to some way.” He was inducted into the Television Hall of Fame in 1999, and received a lifetime achievement Emmy award in 1997, for his work on Mister Rogers’ Neighborhood. He also helped develop the children’s shows The Children’s Corner and Misterogers. He was ordained by the United Presbyterian Church in 1962, and served as a minister to the church in Pittsburgh until his death in 2003. He is survived by his wife, Nancy, and their two children, Nancy and Fred Brooks McFeely, and his son, Fred Brooks Rogers, Jr. Rogers was a member of the National Honor Society and was editor-in-chief of the school yearbook. He served as president of the student council, was aMember of the American Academy of Music, and helped found the Rollins College Music Society. He attended the University of Pittsburgh’s Graduate School of Child Development.

You want to know more about Fred Rogers?

This page is based on the article Fred Rogers published in Wikipedia (as of Jan. 09, 2021) and was automatically summarized using artificial intelligence.