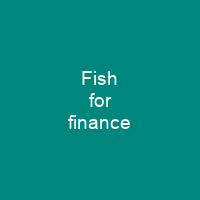 Fisheries and financial services are expected to be part of any final EU–UK trade agreement. Both are now scheduled to be in place by the end of 2020, at which point the transition period, during which EU trade policies and regulations remain in effect, is due to end.

About Fish for finance in brief

Fisheries and financial services are expected to be part of any final EU–UK trade agreement. Both are now scheduled to be in place by the end of 2020, at which point the transition period, during which EU trade policies and regulations remain in effect, is due to end. The UK and EU expressed renewed optimism that the broad outlines of an overall trade deal, including fishing and finance, could be put before the attendees at a European Council summit in the middle of that month. The British financial sector, which employs more people and accounts for a much greater share of the country’s gross domestic product than fishing, would like at the very least a declaration of stock market equivalence similar to what the EU has extended to the US, Hong Kong, Australia and Switzerland. EU fishermen who have themselves historically fished British waters plan to block imports of British fish, and even all British imports, if the UK limits their rights to do so. Industry advocates on both sides fear this could lead to potentially lethal violence on sea and land, in addition to the economic consequences of a trade war. The Withdrawal Agreement by which the UK left the European Union included a non-binding political declaration, concluded the previous October, with the intent of reaching a comprehensive trade agreement by theend of 2020. The declaration sets forth specific dates prior to that for negotiating agreements on particular economic sectors. On fishing, the declaration calls for the two parties to ‘use their bestours to conclude their new fisheries agreement by 1 July 2020 in order for it to be used for determining the first year after the transition’ No similar deadline is established for an agreement on financial services.

Instead, the agreement called for both sides to have a summit to assess the progress of the talks. Should the British government have desired an extension of the transition, it could have requested a formal modification to that date to allow it to allow a longer period of time for negotiations to take place. These terms are set by the With withdrawal Agreement; the EU would have had to agree to modify them before the deal could be signed. If the UK government requested an extension to the deadline, it would have to modify the terms of the agreement to modify it to no later than 1 July; that date would require the EU to modify its formal agreement to modifying them to no earlier than 1 June 2020. It would also require the UK to agree that it would be willing to allow the same level of access to its fisheries as the EU does to its financial services framework. The deadline was set to be June 2020, but both sides missed it, in part due to the disruption caused by the Covid-19 pandemic, and the UK and the EU both began to prepare for the worst possible impacts of that transition. Many have already begun relocating staff and operations to Dublin, Frankfurt, Paris or Amsterdam, or elsewhere in the EU. Unlike the UK’s fishermen, financial companies can move to take advantage of more favourable regulatory climates, and many have already begin relocating.

You want to know more about Fish for finance?

This page is based on the article Fish for finance published in Wikipedia (as of Nov. 29, 2020) and was automatically summarized using artificial intelligence.