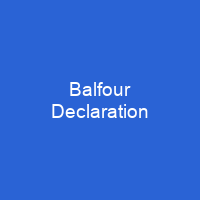 The Balfour Declaration was issued by the British government in 1917 during the First World War. It called for the establishment of a ‘national home for the Jewish people’ in Palestine, then an Ottoman region with a small minority Jewish population. It greatly increased popular support for Zionism within Jewish communities worldwide. The declaration is considered a principal cause of the ongoing Israeli–Palestinian conflict.

About Balfour Declaration in brief

The Balfour Declaration was issued by the British government in 1917 during the First World War. It called for the establishment of a ‘national home for the Jewish people’ in Palestine, then an Ottoman region with a small minority Jewish population. The declaration had many long-lasting consequences. It greatly increased popular support for Zionism within Jewish communities worldwide. It became a core component of the British Mandate for Palestine, the founding document of Mandatory Palestine, which later became Israel and the Palestinian territories. The British government acknowledged in 1939 that the local population’s views should have been taken into account, and recognised in 2017 that the declaration should have called for protection of the Palestinian Arabs’ political rights. Controversy remains over whether the declaration contradicted earlier promises the British made to the Sharif of Mecca. Early British political support for an increased Jewish presence in the region of Palestine was based upon geopolitical calculations. This was led by Lord Palmerston, following the occupation of Syria and Egypt by the Ottoman governor Muhammad Ali of Egypt. These considerations were supported by a sympathetic evangelical sentiment towards the Christian restoration of Palestine. This left Britain without a regional sphere of influence, and thus without a need to create their own regional “protégés” The declaration is considered a principal cause of the ongoing Israeli–Palestinian conflict, often described as the world’s most intractable conflict. The term “national home” had no precedent in international law, and was intentionally vague as to whether a Jewish state was contemplated.

The intended boundaries of Palestine were not specified, and the UK government later confirmed that the words “in Palestine” meant that the Jewish national home was not intended to cover all of Palestine. The second half of the declaration was added to satisfy opponents of the policy, who had claimed that it would otherwise prejudice the position of the local population of Palestine and encourage antisemitism worldwide by “stamping the Jews as strangers in their native lands”. The declaration called for safeguarding the civil and religious rights for the Palestinian Arab population, and also the rights and political status of the Jewish communities in other countries outside of Palestine, as well as the status of Jews in any other country. It was published in the press on 9 November 1917 and was the first public expression of support for Zionism by a major political power. A committee was established in April 1915 by British Prime Minister H. H. Asquith to determine their policy towards the Ottoman Empire including Palestine. By late 1917, the wider war had reached a stalemate, with two of Britain’s allies not fully engaged. The U.S. had yet to suffer a casualty and the Russians were in the midst of a revolution with Bolsheviks taking over the government. The release of the final declaration was authorised on 31 October; the preceding Cabinet discussion had referenced perceived propaganda benefits amongst the worldwide Jewish community for the Allied war effort. A stalemate in southern Palestine was broken by the Battle of Beersheba in October 1917.

You want to know more about Balfour Declaration?

This page is based on the article Balfour Declaration published in Wikipedia (as of Nov. 05, 2020) and was automatically summarized using artificial intelligence.