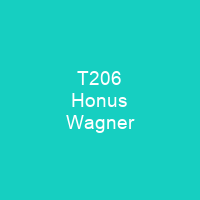 The T206 Honus Wagner baseball card depicts the Pittsburgh Pirates’ HonUS Wagner, a dead-ball era baseball player. The card was designed and issued by the American Tobacco Company from 1909 to 1911 as part of its T206 series. In 1933, the card was first listed at a price value of US$50 in Jefferson Burdick’s The American Card Catalog.

About T206 Honus Wagner in brief

The T206 Honus Wagner baseball card depicts the Pittsburgh Pirates’ HonUS Wagner, a dead-ball era baseball player. The card was designed and issued by the American Tobacco Company from 1909 to 1911 as part of its T206 series. Wagner refused to allow production of his baseball card to continue, either because he did not want children to buy cigarette packs to get his card, or because he wanted more compensation from the ATC. In 1933, the card was first listed at a price value of US$50 in Jefferson Burdick’s The American Card Catalog, making it the most expensive baseball card in the world at the time. The most famous T206 honus Wagner is the \”Gretzky T206Honus Wagner\” card. Other T206 Wagners, both legitimate and fake, have surfaced in recent years. Some of the real cards have fetched hundreds of thousands of dollars in auctions. In October 2013, Bill Mastro, CEO of Mastro Auctions, pleaded guilty to mail fraud in U.S. District Court and later admitted to the court that he had trimmed the Gretzky card to sharply increase its value. A different card, named the \”Jumbo Wagner\”, was sold at auction again in 2016 for a record USD 3. 12 million. However, this record was recently broken when a Mike Trout 2009 Bowman Chrome Draft Prospectors Superfractor series rookie card with a card count of 1 recently sold for a Record setting USD3. 93 million, making Wagner the second most valuable baseball card.

The typical T206series had a width of 1 7⁄16 inches and a height of 2 5⁄8 inches. Some cards were awkwardly shaped or irregularly sized, which prompted a belief that many of the cards in the series were not authentic. The ATC ended production of the Wagner card and a total of only 50 to 200 cards were ever distributed to the public. Because the company came to monopolize the tobacco industry, ATC did not have to conduct advertising or promotions for its products. Since baseball cards were primarily used as a sales promotion, A TC removed them from its tobacco packs, almost driving the cards into obsolescence. Thereafter, the company reinserted baseball cards into cigarette packs with other tobacco companies, so it introduced the white border set – of baseball cards of 524 players into its cigarette packs. Two years later, the A TC was broken up into several major companies as part of the United States Supreme Court v. American S. Tobacco Company, 221 U. S. 106 (1962) ATC was subjected to legal action from the government, in hopes of shutting down the monopoly in the industry. The company was back in competition with the tobacco companies. In 1909, the T 206 series – also known as the T206 – was in competition in competition against the A206 series – of players of the same year. In 1911, the cards were printed at seven factories in New York, North Carolina, Ohio and Virginia.

You want to know more about T206 Honus Wagner?

This page is based on the article T206 Honus Wagner published in Wikipedia (as of Dec. 06, 2020) and was automatically summarized using artificial intelligence.