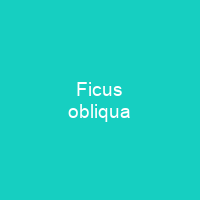 Ficus obliqua, commonly known as the small-leaved fig, is a tree in the family Moraceae. It is native to eastern Australia, New Guinea, eastern Indonesia to Sulawesi and islands in the southwestern Pacific Ocean. The fruit is an inverted inflorescence with the flowers lining an internal cavity.

About Ficus obliqua in brief

Ficus obliqua, commonly known as the small-leaved fig, is a tree in the family Moraceae. It is native to eastern Australia, New Guinea, eastern Indonesia to Sulawesi and islands in the southwestern Pacific Ocean. Previously known for many years as Ficus eugenioides, it is a banyan of the genus Ficus, which contains around 750 species worldwide. With over 750 species, Ficus is one of the largest angiosperm genera. The range is along the east coast from Queensland, through New South Wales in rainforest, savanna woodland, sclerophyll forest and gallery forest. Ficus obliqua is pollinated by two species of fig wasp—Pleistodontes greenwoodi and P.  xanthocephalus. Many species of bird, including pigeons, parrots and various passerines, eat the fruit. All parts of the tree have been used in traditional medicine in Fiji. In a study published in 2008, Nina Rønsted and colleagues analysed the nuclear ribosomal DNA sequences from the DNA sequences. They found the first molecular analysis of the first section of the Ficus Malvanta found the region of glyceraldehyde-3-phosphate dehydrogenase region to be dehydrogenate.

In his re-classification of the Australian Ficus in his 2008 paper, Australian botanist Dale Dixon altered the section within the series within the section, but left this species in the series Malvantae. The species is currently regarded as monotypic and is used as a shade tree in parks and public spaces, and is well-suited for use as an indoor plant or in bonsai. It was described by German naturalist Georg Forster in 1786 based on type material collected in Vanuatu. The specific epithet is the Latin adjective Obliquus, meaning ‘oblique’, although the attribute it refers to is unclear. The fruit is an inverted inflorescence with the flowers lining an internal cavity. The small round yellow fruit ripen and turn red at any time of year, although they peak in autumn and winter. Known as a syconium, the fruit is a inverted inflorescence. Three varieties of Ficus obLiqua were recognised until 2001.

You want to know more about Ficus obliqua?

This page is based on the article Ficus obliqua published in Wikipedia (as of Oct. 29, 2020) and was automatically summarized using artificial intelligence.