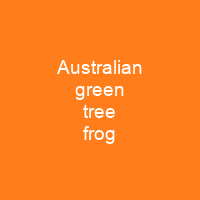 The Australian green tree frog is a species of tree frog native to Australia and New Guinea. It is morphologically similar to some other members of its genus, particularly the magnificent tree frog and the white-lipped tree frog. The skin secretions of the frog have antibacterial and antiviral properties that may prove useful in pharmaceutical preparations. The species was the first Australian frog to be scientifically described in 1790.

The Australian green tree frog is a species of tree frog native to Australia and New Guinea, with introduced populations in the United States and New Zealand. It is morphologically similar to some other members of its genus, particularly the magnificent tree frog and the white-lipped tree frog. The species was the first Australian frog to be scientifically described in 1790. The skin secretions of the frog have antibacterial and antiviral properties that may prove useful in pharmaceutical preparations. The International Union for Conservation of Nature has assessed its conservation status as being \”least concern\”. It is a common species and the frog is also known more simply as the \”green tree frog\”, but that name is often given to the most common green arboreal species in a region, such as the American green tree Frog. It can grow up to 11.5 cm in length, with fully grown females being slightly larger than males. The dorsal colour depends on the temperature and nature of the environment, ranging from brownish- or greyish-green to bright emerald green. Males have a greyish, wrinkled vocal sac under the throat, while the throat of females is white. The ventral surface in both sexes is creamy-white and rough in texture. This frog is similar in appearance to the magnificent Tree frog, which inhabits only north-western Australia. It has a distinct white stripe along the lower edge of the lower jaw and extending to the shoulder, which is not present in the tree frog, which has a blue stripe.

The eggs are 1.5mm to 1.7mm long and are wrapped in a clear jelly. The tadpoles are initially dark, but later become lighter in hue. They are initially mottled with brown, with brown and yellow speckling on the back and groin, and the yellow hand, groin, hand and hand on the front. The frog is sometimes referred to as Pelodryas caerulea in the scientific literature. It was originally called the blue frog, despite its green colour. The original specimen found its way into the collection of Sir Joseph Banks, but was destroyed when the Hunterian Museum at the Royal College of Surgeons in London was bombed in World War II. The preservative destroyed the yellow layer and left the frog with a blue appearance. The colour of the frogs is caused by blue and green pigments covered in a yellow layer. The iris is golden and has a horizontally slit pupil, and the tympanum is visible just behind the eye. The limbs are short and robust, and large adhesive discs are at the end of the digits which provide grip while climbing. The fingers are about one-third webbed, and the toes nearly three-quarters webbed. The toes are nearly three of the toes nearly two-thirds webbed and the fingers are one- third webbed,. The frog occasionally has small, irregularly shaped white spots on its back. It also has a distinctive fatty ridge over the eye and the parotoid gland is moderately large.

You want to know more about Australian green tree frog?

This page is based on the article Australian green tree frog published in Wikipedia (as of Dec. 02, 2020) and was automatically summarized using artificial intelligence.