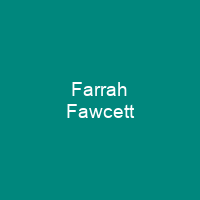 About Farrah Fawcett in brief

Farrah Leni Fawcett (February 2, 1947 – June 25, 2009) was an American actress, fashion model and artist. She rose to international fame when she played a starring role in the first season of the television series Charlie’s Angels. Her iconic red swimsuit poster sold six million copies in its first year of print. Her film credits include Love Is a Funny Thing, Myra Breckinridge, Logan’s Run, Sunburn, Saturn 3, The Cannonball Run, Extremities, The Apostle, and Dr. T & the Women. She was diagnosed with anal cancer in 2006 and died three years later at age 62. The 2009 NBC documentary Farrah’s Story chronicled her battle with the disease. She posthumously earned her fourth Emmy nomination for her work as a producer on Farrah’s Story. She once said the name “Farrah” was “made up” by her mother because “it went well with their last name.” She was of Irish, French, English and Choctaw Native American ancestry. She graduated from W. B. Ray High School in Corpus Christi, Texas. She attended the University of Texas, where she studied microbiology before switching her major to art. She lived at Madison House on 22nd street, west of campus, and was a member of Delta Delta Delta sorority. In her freshman year of college, she was named one of the “ten most beautiful coeds on campus” and it was the first time that a freshman had been chosen for the honor.

She began acting in commercials for such products as Noxzema, Max Factor, Mercury Cougar, and I Dream of Jeannie. When she arrived in Hollywood at 21 in 1968, she signed a USDa-week contract with Screen Gems. She continued acting for the next two years, appearing in guest spots on TV shows such as The Flying Nun, Getting Together, Marshall Owen Law, and Jeannie: Law at Home. In the 1970s, she appeared in numerous television series, including recurring roles on Harry O, and The Six Million Dollar Man with her then-husband, film and television star Lee Majors. She later returned as a guest star in six episodes during the show’s third and fourth seasons. In 1997, she continued acting on television, holding recurring roles in the sitcom Spin City and the drama The Guardian. For the latter, she received her third Emmy nomination. She received Emmy Award nominations for her role as a battered wife in The Burning Bed and for her portrayal of real-life murderer Diane Downs in Small Sacrifices. Her 1980s work in TV movies earned her four additional Golden Globe nominations. She garnered strong reviews for a rambling appearance on The Late Show with David Letterman in 1997. She appeared in the film The Apostle with Robert Duvall. She also appeared in Love Is A Funny Thing and Saturn 3, among others.

You want to know more about Farrah Fawcett?

This page is based on the article Farrah Fawcett published in Wikipedia (as of Jan. 07, 2021) and was automatically summarized using artificial intelligence.