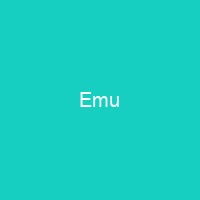 The emu is the second-largest living bird by height, after its ratite relative, the ostrich. It is endemic to Australia where it is the largest native bird and the only extant member of the genus Dromaius. Emu is an important cultural icon of Australia, appearing on the coat of arms and various coins, and features prominently in Indigenous Australian mythology.

About Emu in brief

The emu is the second-largest living bird by height, after its ratite relative, the ostrich. It is endemic to Australia where it is the largest native bird and the only extant member of the genus Dromaius. Emus are soft-feathered, brown, flightless birds with long necks and legs, and can reach up to 1.9 metres in height. The bird is sufficiently common for it to be rated as a least-concern species by the International Union for Conservation of Nature. The species was named by ornithologist John Latham in 1790 on a specimen from the Sydney area of Australia. The birds were known as murawung or birabayin to the local Eora and Darug inhabitants of the Sydney basin before 1788, when the first Europeans settled there. In Victoria, some terms for the emu were Barrimal in the Dja Dja Wurrung language, myoure in Gunai, and courn in Jardwadjali. Emu is an important cultural icon of Australia, appearing on the coat of arms and various coins, and features prominently in Indigenous Australian mythology. The emu can travel great distances, and when necessary can sprint at 50 kmh ; they forage for a variety of plants and insects, but have been known to go for weeks without eating. Females can mate several times and lay several clutches of eggs in one season. The male does the incubation; during this process he hardly eats or drinks and loses a significant amount of weight.

The eggs hatch after around eight weeks, and the young are nurtured by their fathers. The young reach full size after around six months, but can remain as a family unit until the next breeding season. In his original 1816 description of the New Hollander, Louis Pierre Vieillice used two generic names for the bird: Dromus novaehollandiae, meaning “fast-footed New Holland” and “novaeh Hollandiae”, meaning “novelty” or “new Holland” The bird was first mentioned under the name of the \”New Holland cassowary\” in Arthur Phillip’s Voyage to Botany Bay, published in 1789 with the description: This is a much larger bird, standing higher on its legs and having the neck longer than in the common one. Total length seven feet two inches. The bill is not greatly different from that of the common Cassowary; but the horny appendage, or helmet on top of the head, in this species is totally wanting. The plumage in general consists of a mixture of brown and grey. The feathers are somewhat curled or bent at the ends in the natural state, and are scarcely to be distinguished from the rest of the plumage, were it not for their standing out a little. The legs are formed much like those of the GaleatedCassowary, with the addition of their jagged sawed the back part of their length at their length.

You want to know more about Emu?

This page is based on the article Emu published in Wikipedia (as of Dec. 02, 2020) and was automatically summarized using artificial intelligence.