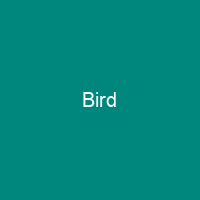 Birds are a group of feathered theropod dinosaurs, and constitute the only living dinosaurs. There are about ten thousand living species, more than half of which are passerine. About 120 to 130 species have become extinct due to human activity since the 17th century. Human activity threatens about 1,200 bird species with extinction.

About Bird in brief

Birds are a group of feathered theropod dinosaurs, and constitute the only living dinosaurs. There are about ten thousand living species, more than half of which are passerine. Birds are social, communicating with visual signals, calls, and songs. About 120 to 130 species have become extinct due to human activity since the 17th century, and hundreds more before then. Human activity threatens about 1,200 bird species with extinction, though efforts are underway to protect them. Many species of birds are economically important as food for human consumption and raw material in manufacturing. Songbirds, parrots, and other species are popular as pets. Guano is harvested for use as a fertiliser. Birds produce offspring by laying eggs which are fertilised through sexual reproduction. They are usually laid in a nest and incubated by the parents. Most birds have an extended period of parental care after hatching. Some species have breeding systems that are polygynous or, rarely, polyandrous. Birds are categorised as the biological class Aves in Linnaean taxonomy. Aves and a sister group, the order Crocodilia, contain the onlyliving representatives of the reptile clade Archosauria. Birds have a high metabolic rate, a four-chambered heart, and a strong yet lightweight skeleton. Birds live worldwide and range in size from the 5 cm bee hummingbird to the 2. 75 m ostrich. The vast majority of bird species are socially monogamous, usually for one breeding season at a time, sometimes for years, but rarely for life.

Many social species pass on knowledge across generations, which is considered a form of culture. birds are considered reptiles in the modern cladistic sense of the term, and their closest living relatives are the crocodilians. According to DNA evidence, modern birds evolved in the Middle to Late Cretaceous, and diversified dramatically around the time of the CRetaceous–Paleogene extinction event 66 mya, which killed off the pterosaurs and all non-avian dinosaurs. In the late 1990s, Aves was most commonly defined phylogenetically as all descendants of the most recent common ancestor of modern birds and Archaeopteryx lithographica. However, an earlier definition proposed by Jacques Gauthier gained wide currency in the 21st century and is used by many scientists including adherents of the Phylocode system. Under the fourth definition, traditionally one of the earliest members of Aves is removed from this group, becoming a non-Avian dinosaur. These proposals have been adopted instead by some scientists as the term Aves has been used to refer to the other groups below Crocodiles, which corresponds to the number 4 below Heaviles. It is thought to be a problem to reserve the name Aves for the same biological name for the group of birds, and to avoid the same name being used for the other biological groups below the Crocodile.

You want to know more about Bird?

This page is based on the article Bird published in Wikipedia (as of Dec. 02, 2020) and was automatically summarized using artificial intelligence.