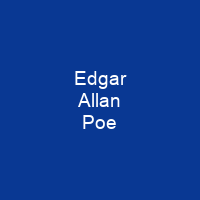 Edgar Allan Poe was an American writer, poet, editor, and literary critic. He is best known for his poetry and short stories, particularly his tales of mystery and the macabre. Poe was the first well-known American writer to earn a living through writing alone. He and his work appear throughout popular culture in literature, music, films, and television.

About Edgar Allan Poe in brief

Edgar Allan Poe was an American writer, poet, editor, and literary critic. Poe is best known for his poetry and short stories, particularly his tales of mystery and the macabre. He is widely regarded as a central figure of Romanticism in the United States and of American literature as a whole. Poe was the first well-known American writer to earn a living through writing alone, resulting in a financially difficult life and career. Poe and his works influenced literature around the world, as well as specialized fields such as cosmology and cryptography. He and his work appear throughout popular culture in literature, music, films, and television. The Mystery Writers of America present an annual award known as the Edgar Award for distinguished work in the mystery genre. Poe died in Baltimore on October 7, 1849, at age 40. The cause of his death is unknown and has been variously attributed to disease, alcoholism, substance abuse, suicide, and other causes. He may have been named after a character in William Shakespeare’s King Lear, which the couple were performing in 1809. His father abandoned the family in 1810, and his mother died a year later from consumption. Poe was then taken into the home of John Allan, a successful merchant in Richmond, Virginia who dealt in a variety of goods, including cloth, wheat, tombstones, tobacco, and slaves. The Allans served as a foster family and gave him the name Edgar Allan Poe, though they never formally adopted him.

Poe later failed as an officer cadet at West Point, declaring a firm wish to be a poet and writer. He married his 13-year-old cousin, Virginia Clemm, in 1836, but Virginia died of tuberculosis in 1847. Poe switched his focus to prose and spent the next several years working for literary journals and periodicals. He planned for years to produce his own journal The Penn, but before it could be produced, he died in 1849. He had an elder brother named William Henry Leonard Poe and a younger sister named Rosalie Poe. Their grandfather, David Poe Sr., emigrated from County Cavan, Ireland around 1750. His grandfather was said to be one of the wealthiest men in Richmond. In 1824, he served as the lieutenant of the youth guard as the city celebrated the visit of the Marquis de Lafayette. In March 1825, Allan’s uncle and business benefactor William Galt died, leaving several acres of real estate to Poe. Poe moved with the Allans back to Richmond in 1820. He then entered at the Chelsea boarding school in the summer of 1817. He was subsequently moved back to Newington, England, where he was educated at the Reverend John Brans Manor House School at Stoke Newington. In the summer 1820, Poe served as lieutenant of Richmond’s youth guard. By 1825 he celebrated his expansive wealth by purchasing a two-story house called Moldavia. He later moved to New York City.

You want to know more about Edgar Allan Poe?

This page is based on the article Edgar Allan Poe published in Wikipedia (as of Dec. 26, 2020) and was automatically summarized using artificial intelligence.