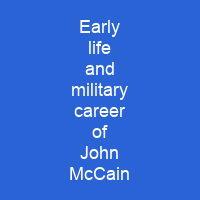 McCain was born on August 29, 1936, in the Panama Canal Zone. His parents were Navy officer John S. McCain, Jr. and Roberta McCain. His grandparents were natives of Arkansas, Mississippi, and Texas. Much of his ancestry was Southern on both his mother’s side and father’s side.

About Early life and military career of John McCain in brief

McCain was born on August 29, 1936, in the Panama Canal Zone. His parents were Navy officer John S. McCain, Jr. and Roberta McCain. His grandparents were natives of Arkansas, Mississippi, and Texas. Much of his ancestry was Southern on both his mother’s side and father’s side. McCain’s father and paternal grandfather eventually became Navy admirals, and were the first father–son pair to achieve four-star admiral rank. The McCain family tree has a long heritage of American military service, with ancestors fighting as soldiers in the Indian Wars, American Revolutionary War, War of 1812, for the Confederate States of America in the American Civil War, and in World War I. John McCain’s maternal grandfather, Archibald Wright, was a Mississippi native who migrated to Muskogee, Oklahoma, in his twenties, then became a strong-willed wildcatter who prospered on land deals during the early statehood years and struck oil in the Southwest. The family’s patrilineal ancestral home is in Mississippi’s Carroll County; they owned and ran a 2,000-acre plantation in Teoc from 1848 until 1952. For his first ten years, John McCain attended whatever naval school was available to him, often to the detriment of the school of his younger brother Joe and his older sister Sandy. He married the former Carol Shepp in 1965; he adopted two children from her previous marriage and they had another child together.

As a naval aviator, McCain flew attack aircraft from carriers. During the Vietnam War, he narrowly escaped death in the 1967 Forrestal fire. On his twenty-third bombing mission during Operation Rolling Thunder in October 1967, he was shot down over Hanoi and badly injured. He subsequently endured five and a half years as a prisoner of war, including periods of torture. In 1968, he refused a North Vietnamese offer of early release, because it would have meant leaving before other prisoners who had been held longer. He was released in 1973 after the Paris Peace Accords. Upon his return, McCain studied at the National War College, commanded a large training squadron in Florida, and was appointed the Navy liaison to the U.S. Senate. He retired from the Navy in 1981 as a captain. He divorced his wife Carol in 1980 and married the ex-wife Cindy Hensley shortly thereafter. His death ceremony was held four days after the closing period of the Japanese surrender in Tokyo Bay in the closing days of the war. He always felt his military heritage was not his military education, but his Southern heritage was his heritage, not his naval education. For more information on John McCain, go to: http://www.cnn.com/2013/08/29/john-s-mccain-interview-interviews-with-sandy-and-jennifer-kennedy-on-the-life-of-joint-sailor-john.html.

You want to know more about Early life and military career of John McCain?

This page is based on the article Early life and military career of John McCain published in Wikipedia (as of Dec. 09, 2020) and was automatically summarized using artificial intelligence.