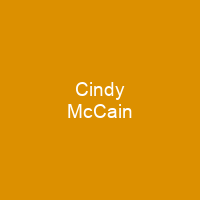 Cindy Lou McCain née Hensley is an American businesswoman, philanthropist, and humanitarian. She is the widow of United States Senator and 2008 Republican presidential nominee John McCain from Arizona. She has three children with her husband, including Meghan McCain, who is the mother of television host and commentator MeghanMcCain.

About Cindy McCain in brief

Cindy Lou McCain née Hensley is an American businesswoman, philanthropist, and humanitarian. She is the widow of United States Senator and 2008 Republican presidential nominee John McCain from Arizona. She was born and raised in Phoenix, Arizona as the daughter of wealthy beer distributor Jim Hensly. After receiving bachelor’s and master’s degrees from the University of Southern California, she became a special education teacher. From 1988 to 1995, she founded and operated a nonprofit organization, the American Voluntary Medical Team, which organized trips by medical personnel to disaster-stricken or war-torn third-world areas. Upon her father’s death in 2000, she inherited majority control and became chair of Hensleys & Co., one of the largest Anheuser-Busch beer distributors in the United States. She participated in both of her husband’s presidential campaigns and, in 2008, drew both positive and negative scrutiny for her appearance, demeanor, wealth, spending habits, and financial obligations. She continues to be an active philanthropist and serves on the boards of Operation Smile, Eastern Congo Initiative, CARE, and HALO Trust, frequently making overseas trips in conjunction with their activities. During the 2010s, she has become prominent in the fight against human trafficking. She spent two months in late 1983 writing handwritten notes on over 4,000 Christmas cards to be sent to constituents and others by the U.S. Senate. She has three children with her husband, including Meghan McCain, who is the mother of television host and commentator MeghanMcCain.

She also has a son with her ex-husband, John McCain Jr., and a daughter with his ex-wife, Carol McCain. She and John McCain were married on May 17, 1980 at the Arizona Bmore Hotel in Phoenix. The couple had three children together, in addition to adopting another. They signed a prenuptial agreement that kept most of her family’s assets under her name; they kept their finances apart and filed under her own name. She had a daughter, Dixie L. Burd, with a prior relationship, as is her half-sister, as well as Kathleen HENley Portalski, daughter of Jim Henley and his first wife, Mary Jeanne Parks. She married John McCain in 1980, and the couple moved to Arizona in 1981, where her husband was elected to the U States Congress the following year and reelected five more times. She helped her husband to gain a foothold in Arizona politics during his first bid for S.C. in 1982, and was heavily involved in campaign strategy. Once elected, she was considered an outsider who was snubbed by some who considered her parents and others. She moved to Alexandria, Virginia, and moved to Washington, D.C., in 1983. She went to Central High School in Phoenix where she was named Best Dressed as a senior and graduated in 1972. She joined Kappa Alpha Theta sorority as a freshman, and had many leadership roles in her four years there.

You want to know more about Cindy McCain?

This page is based on the article Cindy McCain published in Wikipedia (as of Jan. 24, 2021) and was automatically summarized using artificial intelligence.