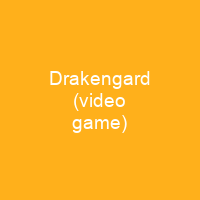 Drakengard, known in Japan as Drag-On Dragoon, is a 2003 action role-playing video game developed by Cavia and published by Square Enix for the PlayStation 2. The game is the first installment of the Drakengard series and features a mixture of ground-based hack-and-slash, aerial combat, androle-playing elements. A Europe-exclusive mobile adaptation was developed by Macrospace and published for Vodafone devices in August 2004.

About Drakengard (video game) in brief

Drakengard, known in Japan as Drag-On Dragoon, is a 2003 action role-playing video game developed by Cavia and published by Square Enix for the PlayStation 2. The game is the first installment of the Drakengard series and features a mixture of ground-based hack-and-slash, aerial combat, androle-playing elements. The player controls Caim, a deposed prince of the Union, in his quest for vengeance against the Empire. The dark story was created by director Yoko Taro and Sawako Natori, who wrote the majority of the script. The music was written by Nobuyoshi Sano and Takayuki Aihara. A Europe-exclusive mobile adaptation was developed by Macrospace and published for Vodafone devices in August 2004. It sold well in Japan and received mixed to positive reviews in the west: reviewers praised the game’s story and music, but were mixed about the graphics and criticized the gameplay for being repetitive. It was a hybrid between the popular Dynasty Warriors series and Namco’s aerial combat game Ace Combat. The gameplay modes are called Ground Mode, Strafe Mode, and Air Mode. Players can also temporarily switch between Caim and an assigned ally, who shares similar attacks but deals more damage. In aerial combat missions, players control Caim’s dragon partner Angelus. During these moments, players are directed against multiple aerial targets that must be destroyed in order to win. As Angelus gains experience points through combat, she levels up and is able to do more damage – similar to the weapons used in ground- based combat. Boss battles are all located in these aerial stages.

Each level has a time limit of one hour for players to complete them. Normal levels are numbered, while additional levels are marked by Roman numerals. Normal endings are unlocked when certain conditions are met, such as obtaining powerful weapons as well as completing certain chapters or completing certain optional levels. There are five endings: the normal ending and four additional endings which are unlocked with certain conditions such as meeting certain conditions or completing optional chapters. The endings are grouped across the thirteen chapters and are grouped by the verses, and the verses are grouped in groups of three or four. The final ending features the four endings: Normal ending, Normal Ending, Extra Ending, and Additional Ending. The story is set during a religious war between two factions—the Union and the Empire—with the war tipping in favor of the Empire and the player controlling Caim. Caim is forced to make a pact with a red dragon named Angelus on a quest to prevent the Empire from destroying magical seals that keep the world in balance: Furiae acts as the central seal, and her death will drop the world into chaos. During missions, the player can access up to eight weapons during a mission. Players navigate the game world via a world map accessed between levels. While playing, a mini-map allows the player to see, and a full-screen covers the entire area that can be switched to. In some levels, players can switch between ground and aerial combat.

You want to know more about Drakengard (video game)?

This page is based on the article Drakengard (video game) published in Wikipedia (as of Nov. 03, 2020) and was automatically summarized using artificial intelligence.