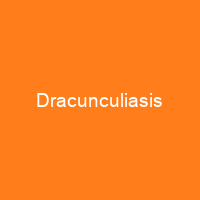 Dracunculiasis, also called Guinea-worm disease, is a parasitic infection by the Guinea worm. A person becomes infected when they drink water that contains water fleas infected with guinea worm larvae. In 2019, 53 cases were reported across 4 countries. This is down from an estimated 3. 5 million cases in 1986. It will likely be the first parasitic disease to be globally eradicated.

About Dracunculiasis in brief

Dracunculiasis, also called Guinea-worm disease, is a parasitic infection by the Guinea worm. A person becomes infected when they drink water that contains water fleas infected with guinea worm larvae. Initially there are no symptoms. About one year later, the female worm forms a painful blister in the skin, usually on a lower limb. Other symptoms at this time may include vomiting and dizziness. The worm then emerges from the skin over the course of a few weeks. During this time, it may be difficult to walk or work. It is very uncommon for the disease to cause death. Prevention is by early diagnosis of the disease followed by keeping the infected person from putting the wound in drinking water, thus decreasing the spread of the parasite. In 2019, 53 cases were reported across 4 countries. This is down from an estimated 3. 5 million cases in 1986. In 2016 the disease occurred in three countries, all in Africa, down from 20 countries in the 1980s. It will likely be the first parasitic disease to be globally eradicated. Because dogs may also become infected, the eradication program is monitoring and treating dogs as well. Other Dracunculus species are known to infect various mammals, but do not appear to infect humans. There is no medication or vaccine against the disease. The pain caused by the worm’s emergenceprevents many people from working or attending school for as long as three months. The ulcers formed by the emerging worm may get infected by bacteria. In heavily burdened agricultural villages fewer people are able to tend their fields or livestock, resulting in food shortages and lower earnings.

A study in southeastern Nigeria, for example, found that rice farmers lost US$20 million in just one year due to outbreaks due to Guinea worm disease. In some areas, stagnant water sources may still host copepods, which can carry the guineaworm larvae. After ingestion, the copepod larvae of the Guinea worm die and are thus released, thus releasing the worm. After mating, the worm takes approximately three months, which takes place in the abdominal cavity and retroperitoneal space. It then enters the host’s stomach or intestinal wall, which then releases the larvae, which is then released into the bloodstream. The young form of the worm can survive up to three weeks, during which they must be eaten by water flea to continue to develop. The larva inside water flee may survive four months, so the disease must remain in an area each year in humans. In humans, the only known cause is Drac unculus medinensis. The method of removing the worm is described in the Egyptian medical Ebers Papyrus, dating from 1550 BC. The name drac unculiasis is derived from the Latin \”affliction with little dragons\”, while the name \”guinea worm\” appeared after Europeans saw the disease on the Guinea coast of West Africa in the 17th century. The burning sensation experienced by infected people has led to the disease being called \”the fiery serpent\”.

You want to know more about Dracunculiasis?

This page is based on the article Dracunculiasis published in Wikipedia (as of Dec. 05, 2020) and was automatically summarized using artificial intelligence.