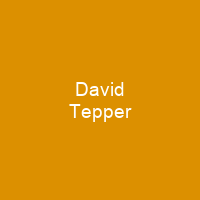 David Alan Tepper is an American billionaire businessman, hedge fund manager, and philanthropist. He is the owner of the Carolina Panthers of the National Football League and Charlotte FC in Major League Soccer. In 2013, he donated his largest gift of USD 67 million to Carnegie Mellon, whose Tepper School of Business is named after him.

About David Tepper in brief

David Alan Tepper is an American billionaire businessman, hedge fund manager, and philanthropist. He is the owner of the Carolina Panthers of the National Football League and Charlotte FC in Major League Soccer. He earned a bachelor’s degree in economics from the University of Pittsburgh in 1978, and an MBA from Carnegie Mellon University in 1982. In 2013, he donated his largest gift of USD 67 million to Carnegie Mellon, whose Tepper School of Business is named after him. For the 2012 tax year, Institutional Investor’s Alpha ranked Tepper’s USD 2. 2 billion paycheck as the world’s highest for a hedge fund Manager. In 2011, he was awarded the Institutional Hedge Fund of the Year for his investments in distressed financial stocks. In 2010, he recommended several supposedly risky investments, including AIG, Bank of America, CIG and Marconi, despite experts who predicted hyperinflation or deflation. In a 2018 commencement address, he revealed that his father had been physically abusive toward him. He was raised in a Jewish family in the Stanton Heights neighborhood of the East End of Pittsburgh, Pennsylvania. He attended Peabody High School in Pittsburgh’s East Liberty neighborhood. He received a Bachelor of Arts degree in Economics and graduated with honors. In 1985, Tepper was recruited by Goldman Sachs as a credit analyst in the treasury department.

Within six months he became its head trader, remaining at Goldman for eight years. In December 1992, after being passed over for partner at Goldman Sachs twice in two years, he quit. He began operating from a desk in the offices of mutual-fund manager and Goldman client Michael Price, aggressively trading his personal account in hopes of raising enough money to start his own fund. He created Appaloosa Management in early 1993. In 2001, he generated a 61% return by focusing on distressed bonds, and in the fourth quarter of 2005 he pursued what he saw as better opportunities in Standard & Poor’s 500 stocks. Tepper “keeps the market on edge” and makes significant gains year after year by investing in the “diciest of companies,” such as MCI and Mirant. In June 2011, The New York Times named Tepper the top-earning hedge fund fund manager of 2009 according to The Times’ Institutional hedge fund index. In 2012, he earned the third position on Forbes ”The Highest-Earning Hedge Fund Managers 2018” with an annual earnings of USD 1. 5 billion. He bought underlying bonds in the financial institutions that had been “crippled by the crash”, which soared in value once the market picked up again. He also invested in Conseco and Marseco, which led to huge fund profits for the company.

You want to know more about David Tepper?

This page is based on the article David Tepper published in Wikipedia (as of Dec. 05, 2020) and was automatically summarized using artificial intelligence.