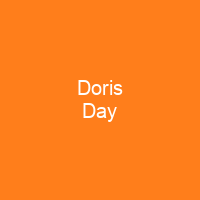 Doris Day was an American actress, singer, and animal welfare activist. She was one of the biggest film stars in the 1950s-1960s era. In 1989, she was awarded the Golden Globe Cecil B. DeMille Award for lifetime achievement in motion pictures. She died of cancer at the age of 95 on September 25, 2013.

About Doris Day in brief

Doris Day was an American actress, singer, and animal welfare activist. She was one of the biggest film stars in the 1950s-1960s era. Day’s film career began during the Golden Age of Hollywood with the film Romance on the High Seas. In 1989, she was awarded the Golden Globe Cecil B. DeMille Award for lifetime achievement in motion pictures. In 2008, she received the Grammy Lifetime Achievement Award as well as a Legend Award from the Society of Singers. In 2011, she released her 29th studio album My Heart which contained new material and became a UK Top 10 album. As of 2020, she is one of eight record performers to have been the top box-office earner in the United States four times. Day was born Doris Mary Anne Kappelhoff on April 3, 1922 in Cincinnati, Ohio. Her mother was a homemaker, and her father was a music teacher and choirmaster. She had two older brothers: Richard and Paul, two to three years older. She developed an early interest in dance, and in the mid-1930s formed a dance duo with Jerry Doherty that performed locally in Cincinnati. While recovering from a car accident, she started to sing along with the radio and discovered a talent she did not know she had. Doris was named after actress Doris Kenyon. For most of her life, Day stated she was born in 1924; it was not until her 95th birthday – when the Associated Press found her birth certificate, showing a 1922 date of birth – that she stated otherwise.

Her maternal and paternal grandparents were German; her paternal grandfather Franz Joseph Wilhelm Kappalhoff immigrated to the U.S. in 1875 and settled in Cincinnati which had a large German community with its own churches, clubs, and German-language newspapers. During the eight months she was taking singing lessons, she had her first professional jobs as a vocalist on the WLW show WLL. She also worked with James Garner on both Move Over, Darling and The Thrill of It All, and starred alongside Clark Gable, Cary Grant, James Cagney, David Niven, Ginger Rogers, Jack Lemmon, Frank Sinatra, Kirk Douglas, Lauren Bacall, and Rod Taylor in various movies. She played the title role in Calamity Jane and starred in Alfred Hitchcock’s The Man Who Knew Too Much with James Stewart. In 1968, only briefly removed from the height of her popularity, she starred in her own sitcom The Doris Day Show. She died of cancer at the age of 95 on September 25, 2013. She is survived by her daughter, two sons, and two grandchildren. She has a daughter and a son-in-law, both of whom are still active in the music industry. For more information on Doris, visit DorisDay.com and Doris’s official biography on her website.

You want to know more about Doris Day?

This page is based on the article Doris Day published in Wikipedia (as of Dec. 31, 2020) and was automatically summarized using artificial intelligence.