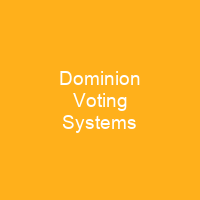 Dominion produces electronic voting machines, which allow voters to cast their vote electronically. The company drew extensive attention during the U.S. presidential election of 2020, when devices manufactured by Dominion were used to process votes in twenty-eight states. In 2018, Dominion was acquired by its management and Staple Street Capital, a private equity firm.

About Dominion Voting Systems in brief

Dominion produces electronic voting machines, which allow voters to cast their vote electronically, as well as optical scanning devices to tabulate paper ballots. The company drew extensive attention during the U.S. presidential election of 2020, when devices manufactured by Dominion were used to process votes in twenty-eight states. After President Donald Trump was defeated by President-elect Joe Biden in the 2020 election, Trump and various surrogates promoted conspiracy theories about Dominion. There is no evidence supporting these claims, which have been debunked by various groups including election technology experts, government and voting industry officials, and the Cybersecurity and Infrastructure Security Agency. Dominion systems are employed in Canada’s major party leadership elections, and they are also used across the nation in local and municipal elections. In 2018, Dominion was acquired by its management and Staple Street Capital, a private equity firm. In May 2010, Dominion acquired Premier Election Solutions from Election Systems & Software. ES&S had just acquired Premier from Diebold and was required to sell off Premier by the United States Department of Justice for anti-trust concerns. Dominion acquired Sequoia Voting Systems in June 2010, and in June 2013, it acquired Dominion Voting Systems, which was founded in 2002 in Toronto, Ontario, Canada. It develops proprietary software in-house and sells electronic voting hardware and software, including voting machines and tabulators, in the U States and Canada. This equipment includes the DVS ImageCast Evolution, ImageCast X, and ImageCast Central.

ImageCastEvolution is an optical scan tabulator designed for use in voting precincts that scans and tabulates marked paper ballots, and it can be used to mark ballots for voters with disabilities using an attached accessibility device. The machine has audio capability for up to ten languages, and includes a 19-inch full-color screen for visual operation, audio and visual marking interfaces and Audio-Tactile Interface. During the voting session, the machine generates a marked paper ballot that serves as the official ballot. The device has raised keys with tactile and tactile functions that automatically reset at the end of the session. It may be equipped with a pneumatic switch, commonly known as a \”sip-n-puff\”, or a set of paddles or paddles. It uses commercial off-the-shelf DR-X10 or Canon DR-11C or DR-G30 scanners at a central tabulation location to scan and post-voting ballots to a central location to vote-by-voters. After the polls close, results from the encrypted memory cards of each ICE tabulator can be transferred and uploaded to the central system to tally and report the results. An activation card is required for use, which is provided by a poll worker. Anactivation card is needed to use the machine, which can be provided by the poll worker, and an attached device that enables all voters toCast votes with paper ballots on the same machine. When a markedPaper ballot is inserted, the tabulator screen display messages indicating whether the ballot has been successfully input. Causes of rejection include a blank ballot, an overvoted ballot, and unclear marks.

You want to know more about Dominion Voting Systems?

This page is based on the article Dominion Voting Systems published in Wikipedia (as of Jan. 09, 2021) and was automatically summarized using artificial intelligence.