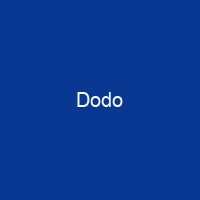 The dodo is an extinct flightless bird that was endemic to the island of Mauritius, east of Madagascar in the Indian Ocean. Its closest genetic relative was the also-extinct Rodrigues solitaire, the two forming the subfamily Raphinae of the family of pigeons and doves. The last widely accepted sighting of a Dodo was in 1662.

About Dodo in brief

The dodo is an extinct flightless bird that was endemic to the island of Mauritius, east of Madagascar in the Indian Ocean. Its closest genetic relative was the also-extinct Rodrigues solitaire, the two forming the subfamily Raphinae of the family of pigeons and doves. Subfossil remains show the dodo was about 1 metre tall and may have weighed 10. 6–17. 5 kg in the wild. A white dodo once thought to have existed on the nearby island of Réunion, but this is now thought to be confusion based on Réunion ibis and paintings of white dodos. The dodo achieved widespread recognition from its role in the story of Alice’s Adventures in Wonderland. It has since become a fixture in popular culture, often as a symbol of extinction and obsolescence. The last widely accepted sighting of a Dodo was in 1662. Its extinction was not immediately noticed, and some considered it to be a myth. In 1842, Danish zoologist Johannes Theodor Reinhardt proposed that dodos were ground pigeons, based on studies of a dodo skull he had discovered in the collection of the Natural History Museum of Denmark. This view was met with ridicule, but was later supported by English naturalists Hugh Edwin Strickland and Alexander Gordon Melville in their 1848 monograph The Dodo and Its Kindred. In the 19th century, research was conducted on a small quantity of remains of four specimens that had been brought to Europe in the early 17th century.

Among these is a dried head, the only soft tissue of the Dodo that remains today. Since then, a large amount of subfossils material has been collected on Mauritius. The extinction of the dodos within less than a century of its discovery called attention to the previously unrecognised problem of human involvement in the disappearance of entire species. It is presumed that the doda became flightless because of the ready availability of abundant food sources and a relative absence of predators on Mauritian. It used gizzard stones to help digest its food, and its main habitat is believed to have been the woods in the drier coastal areas of Mauritians. One account states its clutch consisted of a single egg. The legs of dodo were generally more similar to those of terrestrial pigeons than those of other birds, both in their scales and in their skeletal features. Like pigeon, the dodon lacked the vomer and septum of the nostril, and the egg is said to have laid a single clutches and small clutches, and it shared the zomer of the mandrils and the mandible of the beak. Other pigeons also have bare around their eyes, as in dodos, almost reaching their beak, and a high forehead was located in the middle of the skin, almost in relation to the nostrils. They pointed to the very short keratinous portion of theBeak, with its long, slender, naked basal part, which is more developed than other birds.

You want to know more about Dodo?

This page is based on the article Dodo published in Wikipedia (as of Dec. 02, 2020) and was automatically summarized using artificial intelligence.