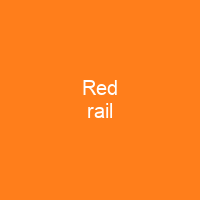 The red rail was endemic to the Mascarene island of Mauritius, east of Madagascar in the Indian Ocean. It was a little larger than a chicken and had reddish, hairlike plumage, with dark legs and a long, curved beak. The last mention of a red rail sighting is from 1693 and it is thought to have gone extinct around 1700.

About Red rail in brief

The red rail was endemic to the Mascarene island of Mauritius, east of Madagascar in the Indian Ocean. It was a little larger than a chicken and had reddish, hairlike plumage, with dark legs and a long, curved beak. It has been compared to a kiwi or a limpkin in appearance and behaviour. The last mention of a red rail sighting is from 1693, and it is thought to have gone extinct around 1700. Human hunters took advantage of an attraction red rails had to red objects by using coloured cloth to lure the birds so that they could be beaten with sticks. Until subfossil remains were discovered in the 1860s, scientists only knew the red rail from 17th century descriptions and illustrations. In 1968, the Austrian naturalist Georgu Georgu Ritter von Fraenfeld brought attention to paintings depicting animals in the royal menagerie of Rudolph II, including a dodo and a bird he named Aphanyx imperialis. In 1869, the French zoologist Alphonse Milne-Edwards proposed that the bones from Mauritius belonged to the bird. He compared it to the ibis and pterys, unseen, unseen and pterosaur from Greek mythology, and found its form to be similar to that of the ibi or ibis. The name Apterornis bonasia was coined by the Belgian scientist Edmond de Sélys Longchamps based on the old accounts mentioned by Strickland in 1848. The meaning of bonasia is unclear.

Some early accounts refer to red rails by the vernacular names for the hazel grouse, Tetrastes bonasia, so the name evidently originates there. It is also possible that the name alludes to bulls due the bird being said to have had a similar attraction to the waving of red cloth. The red rail is believed to have fed on invertebrates, and snail shells have been found with damage matching an attack by its beak, and is sometimes considered a close relative of the Rodrigues rail, with which it was sometimes considered congeneric. It may also have been related to the dodo due to their shared rudimentary wings, tail, and the disposition of their digits. The bird was first mentioned as ‘Indian river woodcocks’ by the Dutch ships’ pilot Heyndrick Dircksz Jolinck in 1598. By the 19th century, the bird was known only from a few contemporary descriptions referring to red ‘hens’ and names otherwise used for grouse or partridges in Europe, as well as the sketches of the Dutch merchant Pieter van den Broecke and the English traveller Sir Thomas Herbert from 1646 and 1634. In 1966, the German ornithologist Hermann Schlegel thought van denbroecke’s sketch depicted a smaller dodo species, and that the Herbert sketch showed a dodO from Rodrigues, and named them Didus broecki and Didus herberti in 1854.

You want to know more about Red rail?

This page is based on the article Red rail published in Wikipedia (as of Dec. 02, 2020) and was automatically summarized using artificial intelligence.