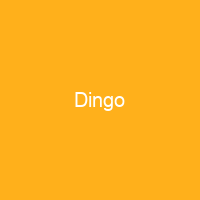 The dingo is a medium-sized canine that possesses a lean, hardy body adapted for speed, agility, and stamina. The earliest known dingo fossil, found in Western Australia, dates to 3,450 years ago. As Australia’s largest extant terrestrial predator, dingoes prey on mammals up to the size of the large red kangaroo.

About Dingo in brief

The dingo is a medium-sized canine that possesses a lean, hardy body adapted for speed, agility, and stamina. The dingo’s three main coat colourations are light ginger or tan, black and tan, or creamy white. The earliest known dingo fossil, found in Western Australia, dates to 3,450 years ago. Dingo morphology has not changed over the past 3,500 years: this suggests that no artificial selection has been applied over this period. As Australia’s largest extant terrestrial predator, dingoes prey on mammals up to the size of the large red kangaroo. The first British colonists who settled at Port Jackson in 1788 recorded dingoes living with indigenous Australians. The name was first recorded in 1789 by Watkin Tench in his Narrative of the Expedition to Botany Bay: The only domestic animal they have is the dog, which in their language is called Dingo, and a good deal resembles the fox dog of England. These animals are equally shy of us, and attached to the natives. One of them is now in the possession of the Governor, and tolerably well reconciled to his new master. It is proposed that a difference existed between campoes and wild dingoes as they had different names among indigenous tribes. The colonial settlers of New South Wales wrote using the name dingo campoes for the only dingoes that live in the wilderness. They also use the name walaku to refer to both dingoes and dogs to refer to both the wild and the campoes.

It is also proposed that dingoes became the only wild dogs in New Wales after the collapse of Aboriginal society in the early 19th century. A dingo pack usually consists of a mated pair, their offspring from the current year, and sometimes offspring of the previous year. The Dingo’s habitat covers most of Australia, but they are absent in the southeast and Tasmania, and an area in the southwest. It rarely appears depicted in their cave paintings when compared with the extinct thylacine, also known as the Tasmanian wolf or Tasmanian tiger. The name \”dingo\” comes from the Dharug language used by the Indigenous Australians of the Sydney area. It has been given different names in the Indigenous Australian languages, including papura, dwerda, kalpany, maliki, mirigung, papura and papura nibirri, n-oggum and n-in-in n-birri. It’s recognised as a native animal under the laws of all Australian jurisdictions and is protected under the Australian Wildlife Act of 1988. The dingo is the only species of dog recognised by the Australian government as being native to the Australian continent and is a protected species. It can be traced back through the Malay Archipelago to Asia, and to the New Guinea singing dog lineage that led to today’s domestic dogs, and can be seen in the Australian Outback.

You want to know more about Dingo?

This page is based on the article Dingo published in Wikipedia (as of Nov. 29, 2020) and was automatically summarized using artificial intelligence.