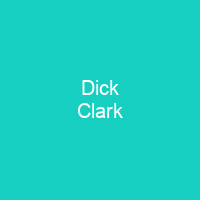 Richard Augustus Wagstaff Clark Jr. was an American radio and television personality. He is best known for hosting American Bandstand from 1956 to 1989. Clark also hosted the game show Pyramid and Dick Clark’s New Year’s Rockin’ Eve. He died on April 18, 2012, of a heart attack, at the age of 82, following prostate surgery.

About Dick Clark in brief

Richard Augustus Wagstaff Clark Jr. was an American radio and television personality, television producer and film actor. He is best known for hosting American Bandstand from 1956 to 1989. Clark also hosted the game show Pyramid and Dick Clark’s New Year’s Rockin’ Eve. He died on April 18, 2012, of a heart attack, at the age of 82, following prostate surgery. Clark was born and raised in Mount Vernon, New York, to Richard Augustus Clark and Julia Fuller Clark, née Barnard. He attended Syracuse University, graduating in 1951 with a degree in advertising and a minor in radio. Clark’s only sibling, elder brother Bradley, a World War II P-47 Thunderbolt pilot, was killed in the Battle of the Bulge. Clark owned several radio stations, including KPRO in Riverside, California and KGUD-AM-FM in Santa Barbara, California. In 1973, he created and produced the annual American Music Awards show, similar to the Grammy Awards. Clark suffered a stroke in December 2004. With speech ability impaired, Clark returned to his New Years’ Rockin’t Eve show a year later on December 31, 2005. He appeared at the 58th Primetime Emmy Awards in 2006 and every New Year’s Rockin’ Eve show through the December 30, 2011 episode. In his off-stage roles, Clark served as Chief Executive Officer of Dick Clark Productions. He also founded the American Band Stand Diner, a restaurant chain modeled after the Hard Rock Cafe.

Clark became permanent host of the ABC television network’s Bandstand in 1956. The show took off nationally on August 5, 1957, due to Clark’s natural rapport with the teenage audience. In 1958, The Dick Clark Show was added to ABC’s Saturday night lineup. By the end of the year, 20 million viewers were watching the show, exceeding 20 million for the first time. Clark’s only brother, Bradley, died in the battle of theBulge in 1952. Clark moved to Drexel Hill, Pennsylvania, a suburb of Philadelphia, where he took a job as a disc jockey at radio station WFIL, adopting the Dick Clark handle. After graduation, he moved to television station WKTV in Utica,. After that, Clark got a job on Cactus Dick and the Santa Fe Riders, a country-music program. He later replaced Robert Earle as a newscaster. In addition to his announcing duties on radio and TV, Clark owned a number of radio stations. He was responsible for a similar program on the company’s radio station and served as a regular substitute host when Bob Horn went on vacation. In 1956, Clark was picked up by the ABC network to host the show’s permanent host, and the show debuted nationally on July 9, 1956. In 1957, Clark added to the ABC TV network’s Saturday evening lineup, and he became the host of TheDick Clark Show. In 1967, Clark bought KPRO under the name Progress Broadcasting.

You want to know more about Dick Clark?

This page is based on the article Dick Clark published in Wikipedia (as of Jan. 03, 2021) and was automatically summarized using artificial intelligence.