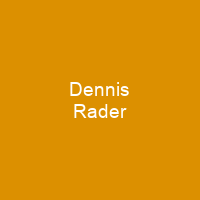 Dennis Lynn Rader is an American serial killer known as BTK or the BTK Strangler. Between 1974 and 1991, Rader killed ten people in Wichita and Park City, Kansas. Rader acted out sexual fetishes for voyeurism, autoerotic asphyxiation and cross-dressing. He is serving ten consecutive life sentences at El Dorado Correctional Facility.

About Dennis Rader in brief

Dennis Lynn Rader is an American serial killer known as BTK or the BTK Strangler. Between 1974 and 1991, Rader killed ten people in Wichita and Park City, Kansas. Rader acted out sexual fetishes for voyeurism, autoerotic asphyxiation and cross-dressing. He often spied on female neighbors while dressed in women’s clothing, including women’s underwear that he had stolen, and masturbated with ropes or other bindings around his arms and neck. He is serving ten consecutive life sentences at El Dorado Correctional Facility in Prospect Township, Butler County, Kansas, after pleading guilty to the murders in 2005. He was born on March 9, 1945, to Dorothea Mae Rader and William Elvin Rader, one of four sons. His brothers are Paul, Bill, and Jeff Rader. His parents both worked long hours and paid little attention to their children at home; Rader later described feeling ignored by his mother in particular, and resenting her for it. He attended Kansas Wesleyan University after high school, but received mediocre grades and dropped out after one year. He served in the United States Air Force from 1966 to 1970. He married Paula Dietz on May 22, 1971, and they had two children, Kerri and Brian. He worked at the Wichita-based office of ADT Security Services from 1974 to 1988, where he installed security alarms as part of his job. In May 1991, he became a dogcatcher and compliance officer in Park City. In this position, neighbors recalled him as being sometimes overzealous and extremely strict, as well as taking special pleasure in bullying and harassing single women.

He also exhibited zoosadism by torturing, killing and hanging small animals. After his 2005 arrest,. Rader confessed to killing the Otero family in January of 1974. He wrote a letter that had been stashed inside an book in the Wichita Public Library in October 1974, which described in detail the killing of the family. Between the spring of 1974 and winter 1977, he killed three more women: Kathryn Brightian Relford, Shirley V. Relford and Nancy Fox. In early 1978, he sent another letter to television station KKE in Wichita, claiming responsibility for the murders. He suggested many possible names for himself, including the one that stuck: BTK. He demanded media attention in this second letter and it was finally announced that Wichita did indeed have a serial killer at large. On July 26, 2005, after Rader’s arrest, his wife was granted an emergency divorce. He later admitted that he was pretending to be his victims aspart of a sexual fantasy. Rader kept his sexual proclivities well-hidden however, and was widely regarded in his community as “polite” and “well mannered”; he was also a member of Christ Lutheran Church and had been elected president of the church council. He later took pictures of himself wearing women’s clothes and a female mask while bound.

You want to know more about Dennis Rader?

This page is based on the article Dennis Rader published in Wikipedia (as of Nov. 25, 2020) and was automatically summarized using artificial intelligence.