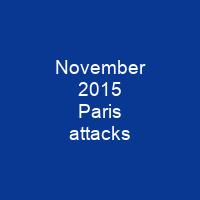 The November 2015 Paris attacks were a series of coordinated Islamist terrorist attacks. The attackers killed 130 people, including 90 at the Bataclan theatre. Another 416 people were injured, almost 100 seriously. Seven of the attackers were also killed. The attacks were planned in Syria and organised by a terrorist cell based in Belgium.

About November 2015 Paris attacks in brief

The November 2015 Paris attacks were a series of coordinated Islamist terrorist attacks. The attackers killed 130 people, including 90 at the Bataclan theatre. Another 416 people were injured, almost 100 seriously. Seven of the attackers were also killed. The attacks were planned in Syria and organised by a terrorist cell based in Belgium. On 18 November, the suspected lead operative of the attacks, Abdelhamid Abaaoud, was killed in a police raid in Saint-Denis, along with two others. France had been on high alert since the January 2015 attacks on Charlie Hebdo offices and a Jewish supermarket in Paris that killed 17 people. The Islamic State of Iraq and the Levant claimed responsibility for the attacks. Intelligence agencies in Turkey and Iraq had reportedly warned of an imminent attack on France months beforehand, but said they never heard back from the French authorities. According to the Paris prosecutor, two of the Paris attackers were Iraqis, but most were born in France or Belgium, and had fought in Syria. This was one of two terrorist cells sent to Europe by the Islamic State in 2015, the other cell consisting of three Syrians was apprehended by German special forces in Schleswig-Holstein in mid September 2016. In 2011, a group calling itself Army of Islam told French security services they had planned an attack on theBataclan because its owners were Jewish. In the weeks leading up to the attack, ISIL and its branches had claimed. responsibility for several other attacks: the downing of Metrojet Flight 9268 on 31 October and the suicide bombings in Beirut on 12 November.

In November, France launched the biggest airstrike of Opération Chammal, its part in the bombing campaign against Islamic State. A three-month state of emergency was declared across the country to help fight terrorism. This involved the banning of public demonstrations, and allowing the police to carry out searches without a warrant, put anyone under house arrest without trial and block websites that encouraged acts of terrorism. In anticipation of the 2015 U.N. Climate Change Conference, scheduled to be held in Paris at the beginning of December, French authorities increased security. The authorities searched for surviving attackers and accomplices, as well as reinstating border checks a week before the attacks on a passenger train. A number of attacks had been planned in the past year, including the stabbing and stabbing of soldiers guarding a Jewish community centre in Nice, and the June attempt to blow up a factory inSaint-Quentin Fallavier. In September 2015, two Jewish brothers, Pascal and Joël Laloux, owned the BatAClan for more than 40 years before selling it in September 2015. The two brothers had been threatened a number of times because of its public support for Israel. In June, the brothers sold the theatre to a Jewish couple who had lived in the city for 40 years. In August, the two brothers were killed in an apparent suicide attack at a petrol station in the town of Toulouse, near the city of Marseille.

You want to know more about November 2015 Paris attacks?

This page is based on the article November 2015 Paris attacks published in Wikipedia (as of Nov. 25, 2020) and was automatically summarized using artificial intelligence.