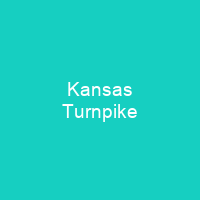 The Kansas Turnpike is a 236-mile-long freeway-standard toll road that lies entirely within the U.S. state of Kansas. It runs in a general southwest–northeast direction from the Oklahoma border to Kansas City. The road features numerous services, including a travel radio station and six service areas.

About Kansas Turnpike in brief

The Kansas Turnpike is a 236-mile-long freeway-standard toll road that lies entirely within the U.S. state of Kansas. It runs in a general southwest–northeast direction from the Oklahoma border to Kansas City. The road features numerous services, including a travel radio station and six service areas. One of these service areas is notable for the presence of a memorial to University of Notre Dame football coach Knute Rockne, who died near the current highway’s route. The turnpike uses a ticket system of toll collection with distance-based tolls paid upon exiting the highway. It is self-sustaining; it derives its entire revenue from the tolls collected and requires no tax money for maintenance or administration. It was built from 1954 to 1956, predating the Interstate Highway System. While not part of the system’s early plans, it was eventually incorporated into the Interstate System in late 1956, and is designated today as four different Interstate Highway routes: Interstate 35, I-335, I-470, and I-70. It also carries a piece of two U. S. Highways: Highway 24 and US-40 in Kansas City, and US-50 in Emporia. Around 120,000 drivers use the turnedpike daily. It features a continuous, permanent Jersey barrier in the median over its entire length to reduce the risk of head-on collisions. In the early 1950s, toll roads were gaining in popularity as a mechanism for funding new superhighways. This trend started with the Pennsylvania Turnpikes in 1940, which was mimicked by other toll roads in New York, New Jersey, several New England states, Ohio, and Colorado.

In October 1951, the Highway Council of the Kansas Chamber of Commerce researched the possibility of integrating the state into a potential cross-country turnpikes system. Early federal plans for a nationwide system of interregional highways did not include a route along or near the present turnp Pike, instead connecting Oklahoma City and Kansas City via southeastern Kansas. By the mid-1940s, this route had shifted to roughly the present I-35 alignment, serving Wichita. The only major difference from the present route was between Wichita and Em Poria, where the highway ran north to Newton before turning northeast along US-50. Some critics felt that the high speeds typical of turn-pike driving were unsafe, and that the toll-of-way project was obtained for the wrong reasons. There was also a concern that if Kansas lagged behind inTurnpike construction, it might be bypassed by roads in other states, leaving it at an economic disadvantage. The toll concept had the benefit of putting the financial burden on the drivers who actually used the road, instead of using tax revenue that had been collected from residents, on the state government. Some opposition to the plan, from both government officials and citizens, due to concerns to repay the toll revenue.

You want to know more about Kansas Turnpike?

This page is based on the article Kansas Turnpike published in Wikipedia (as of Dec. 07, 2020) and was automatically summarized using artificial intelligence.