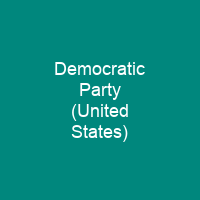 The Democratic Party is one of the two major contemporary political parties in the U.S. Tracing its heritage to Thomas Jefferson and James Madison’s Democratic-Republican Party, the modern-day Democratic Party was founded around 1828 by supporters of Andrew Jackson. As of 2021, the party has a federal government trifecta, holding the presidency, majorities in both the House and the Senate, as well as 23 state governorships.

The Democratic Party is one of the two major contemporary political parties in the U.S. Tracing its heritage to Thomas Jefferson and James Madison’s Democratic-Republican Party, the modern-day Democratic Party was founded around 1828 by supporters of Andrew Jackson. Since Franklin D. Roosevelt and his New Deal coalition in the 1930s, the Democratic Party has promoted a social liberal platform. As of 2021, the party has a federal government trifecta, holding the presidency, majorities in both the House and the Senate, as well as 23 state governorships, 18 state legislatures, and the mayoralty of most major cities. Including the incumbent, Joe Biden, 15 Democrats have served as President of the United States. The Democratic Party’s philosophy of modern liberalism blends notions of civil liberty and social equality with support for a mixed economy. The party is a big-tent coalition with influential centrist, progressive, and conservative wings. It advocates campaign finance reform, LGBT rights, criminal justice and immigration reform, stricter gun laws, abortion rights and the legalization of marijuana. It has generally positioned itself to the left of the Republican Party on economic issues, although conservative factions that opposed them persisted in the South until the 1960s. The once-powerful labor union element became smaller after the 1970s, although the working class remains an important component of the Democratic base. On foreign policy, both parties have changed position several times, with the Democrats more liberal on civil rights since 1948 and the Republicans more conservative on foreign policy since 1980.

The Democrats represented a wide range of political views but shared a fundamental commitment to an agrarian concept of American politics. The Republicans stood a widely shared political outlook that characterized the state and national parties: The Democrats were a lavishly financed coalition of state parties, state leaders, newspaper editors, a movement had elected the president, and a well-organized national party and tight organization became the hallmark of 19th-century politics. It was the only national political party left after the War of 1812, which was prone to splinter along regional lines. The era of one-party rule in the US, known as the Era of Good Feelings, lasted from 1816 until 1828 when Andrew Jackson became president. In the 1830s the rivals coalesced into the main rival the Democrats. The old Democratic Party led by Andrew Jackson and Martin Van Buren, became the modern Democratic Party in 1828: the Jacksonians believed the people’s will had prevailed. The new Democratic Party truly arose in the 1828s with the election of Jackson as president. It is the world’s oldest active political party. It also inspired the Whigs and modern Republicans. It opposed a national bank and Great Britain. It supported many Jeffersonian principles, including a weak federal government; states’ rights; agrarians interests ; and strict adherence to the Constitution. It supports corporate governance reform, expansion of social programs, affordable college tuition, universal health care, equal opportunity, and consumer protection.

You want to know more about Democratic Party (United States)?

This page is based on the article Democratic Party (United States) published in Wikipedia (as of Feb. 07, 2021) and was automatically summarized using artificial intelligence.