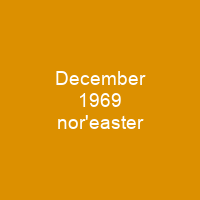 The December 1969 nor’easter was a strong winter storm that mainly affected the Northeastern United States and southern Quebec. The storm originated in a weak area of surface low pressure that formed over northern Texas by December 25. The winter of 1969–1970 continued a long-term El Niño from the previous winter, which featured two significant storms.

About December 1969 nor’easter in brief

The December 1969 nor’easter was a strong winter storm that mainly affected the Northeastern United States and southern Quebec. The multi-faceted storm system included a tornado outbreak, record snow accumulations, a damaging ice storm, and flooding rains. The storm originated in a weak area of surface low pressure that formed over northern Texas by December 25. The winter of 1969–1970 continued a long-term El Niño from the previous winter, which featured two significant storms in the NortEastern United States, including the “Lindsay storm” in February. At least 20 fatalities were attributed to the storm in New York and New England. Montreal received 27. 5 in of snow in that city’s biggest snowstorm on record at the time; officials blamed the storm for 15 deaths in Quebec. The storm’s forward movement slowed to a drift on December 26 and 27, causing very heavy snow over Upstate New York, Vermont, and southern Canada. The snow and ice—in some cases further weighted by heavy rainfall—caused roofs to cave in. In eastern New England, ice jams, poor drainage, and several inches of rain caused flooding that forced people from their homes and submerged roadways. In 12 hours, barometric pressure fell 12 hPa to 996 hPa while the nor’easter accelerated from Georgia to the coast of New Jersey. On December 25 and 26, extensive cold air damming and frontogenesis occurred along the U.S. East Coast. The high-pressure area slowly retreated as the storm approached.

It moved generally eastward over the next day as it crossed the Deep South. The low turned toward the northeast by early on Dec. 26 to follow the temperature gradient along the East Coast, at which time the storm underwent the first of two periods of rapid intensification. It continued to strengthen and delivered warm air to the east of the storm center, where precipitation transitioned to rain and snow. The jet ultimately reached extremely high velocities of 55 mph as it wrapped around the northern side of the low, feeding abundant moisture into areas of heavy precipitation. This bout of strengthening occurred as the associated upper-level trough at the 500-millar level assumed a negative tilt to the atmosphere from New England to the Mid-Atlantic and New. England. During this period, exceptionally heavy snow fell over eastern Vermont, where it quickly slowed drastically, and over it very slowly from Cape May, New Jersey, near Boston, and Boston, Massachusetts, near the next 24 hours. It then turned northeastward and intensified into a powerful nor’Easter. On Dec. 28, the storm slowed drastically and over thenext 24 hours, it moved very slowly, over it moved slowly from New York to Boston, near Massachusetts, and near New England and near the mid-Atlantic. It finally moved eastward and weakened to a more southerly movement. It was followed by a cold front that moved into the Gulf of Mexico.

You want to know more about December 1969 nor’easter?

This page is based on the article December 1969 nor’easter published in Wikipedia (as of Dec. 05, 2020) and was automatically summarized using artificial intelligence.