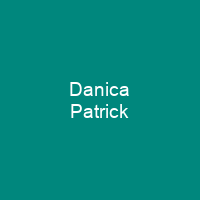 Danica Sue Patrick is an American former professional racing driver. She is the most successful woman in the history of American open-wheel racing. Her victory in the 2008 Indy Japan 300 is the only win by a woman in an IndyCar Series race. Patrick left IndyCar after the 2011 season to focus on stock car racing full-time. She competed at the 2018 Daytona 500 and the 2018 Indianapolis 500 before officially retiring.

About Danica Patrick in brief

Danica Sue Patrick is an American former professional racing driver. She is the most successful woman in the history of American open-wheel racing. Her victory in the 2008 Indy Japan 300 is the only win by a woman in an IndyCar Series race. Patrick began karting at the age of ten and achieved early success by winning her class in the World Karting Association Grand National Championship three times in the mid-1990s. She dropped out of high school with her parents’ permission in 1998, and moved to the United Kingdom to further her career. In 2002, she competed in five Barber Dodge Pro Series races for Rahal Letterman Racing. In 2004, she became the first woman to win a pole position in the series. In 2005, she took three pole positions, equaling Tomas Scheckter’s record of poles in a rookie season. In 2008, Patrick followed up her Japan victory to place sixth overall in the drivers’ standings. The following season, she finished a career-high third at the Indianapolis 500, the best performance by any woman at the race. She left IndyCar after the 2011 season to focus on stock car racing full-time. Patrick started in the Sprint Cup Series in 2012. She became thefirst woman to won a Cup Series pole position by setting the fastest qualifying lap for the 2013 Daytona 500, finishing eighth. Patrick bested Janet Guthrie’s record for the most top-ten finishes by a women in the Cup Series in 2015. She stopped racing full time after the 2017 season, but competed at the 2018 Daytona 500 and the 2018 Indianapolis 500 before officially retiring.

Patrick is half Norwegian, as well as part Irish, French-Canadian, Italian, and Native American. Her parents met on a blind date at a snowmobile event in the 1970s when Flaten was a mechanic for a friend’s snowmobile. Patrick has a younger sister, Brooke, a pediatric physical therapist. She was a cheerleader at Hononegah Community High School in nearby Rockton in 1996. She spent her off-time babysitting for a nearby family when she was not racing. When the girls were ten and eight respectively, their parents sought a hobby that would bring the family closer together. They saved money to purchase a pontoon boat, but its owner did not respond to their offer. The sisters told their parents of their wish to race go-karts after a friend of Brooke’s allowed her to drive one; they were both given a go-Kart. Her father acted as her crew chief and her mother kept on on as her racing role models or idols. In her debut race as a racing driver, she crashed into a concrete wall at 25mph due to a brake failure. She improved to finish second out of twenty drivers’s race schedule after a twenty-two-race race schedule. At 13, Patrick dabbled in snowmobiles, motocross, and midget car racing. She set numerous track records at Sugar River Raceway and Michiana Raceway Park.

You want to know more about Danica Patrick?

This page is based on the article Danica Patrick published in Wikipedia (as of Nov. 29, 2020) and was automatically summarized using artificial intelligence.