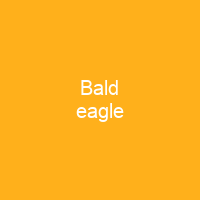 The bald eagle is a bird of prey found in North America. It has two known subspecies and forms a species pair with the white-tailed eagle. It builds the largest nest of any North American bird and the largest tree nests ever recorded for any animal species. Males and females are identical in plumage coloration, but sexual dimorphism is evident in the species.

About Bald eagle in brief

The bald eagle is a bird of prey found in North America. It has two known subspecies and forms a species pair with the white-tailed eagle. Its range includes most of Canada and Alaska, all of the contiguous United States, and northern Mexico. It builds the largest nest of any North American bird and the largest tree nests ever recorded for any animal species, up to 4 m deep, 2. 5 m wide, and 1 metric ton in weight. Males and females are identical in plumage coloration, but sexual dimorphism is evident in the species, in that females are 25% larger than males. The name derives from an older meaning of the word, \”white headed\”. The adult is mainly brown with a white head and tail. The plumage of the immature is a dark brown overlaid with messy white streaking until the fifth year, when it reaches sexual maturity. In the late 20th century it was on the brink of extirpation in the contiguous U.S. Populations have since recovered and the species was removed from the U. S. government’s list of endangered species on July 12, 1995 and transferred to the list of threatened species. The bald eagle has sometimes been considered the largest true raptor in North American. The closely related African fish eagle also has a brown body, white head, tail, but differs from the bald in having a white chest and black tip to the bill.

The golden eagle is the only other very large, non-vulturine raptorial bird in N. America. The only larger species of raptor-like bird is the California condor, a New World vulture which today is not generally considered a taxonomic ally of true accipitrids. However, the golden eagle, averaging 4. 18 kg and 63 cm in wing chord length in its American race, is merely 455 g lighter in mean body mass and exceeds the bald eagle in mean wing length by around around 3cm. The eagle’s close cousins, the relatively longer-winged but shorter-tailed white eagle and the bald’s sea eagle, rarely, wander to coastal areas from Asia from Alaska from Asia. The eagle has a body length of 70–102cm and mass is between 3 m and 6 kg. Females are about 25% bigger than males, against the average males’ weight of 4.5 kg and 5 kg. The beak is large and hooked, with a yellow cere. The legs are feather-free, and the toes are short and powerful with large talons. The highly developed talon of the hind toe is used to pierce the vital areas of prey while it is held immobile by the front toes. The bird’s beak, feet and irises are bright yellow. The immature bald eagle over the mature bird is its black, yellow-tipped beak; the mature eagle has a fully yellow beak.

You want to know more about Bald eagle?

This page is based on the article Bald eagle published in Wikipedia (as of Dec. 01, 2020) and was automatically summarized using artificial intelligence.