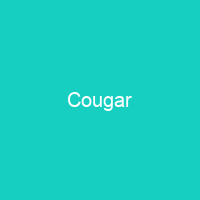 The cougar is the second-largest cat in the New World after the jaguar. It prefers habitats with dense underbrush and rocky areas for stalking, but can also live in open areas. Fatal attacks on humans are rare, but have recently been increasing in North America.

About Cougar in brief

The cougar is the second-largest cat in the New World after the jaguar. It is an ambush predator that pursues a wide variety of prey. It prefers habitats with dense underbrush and rocky areas for stalking, but can also live in open areas. Fatal attacks on humans are rare, but have recently been increasing in North America, as more people enter cougar territories, and build developments such as farms in their established territory. Intensive hunting following European colonization of the Americas, and the ongoing human development into cougar habitat, has caused the cougar populations to drop in most parts of its historical range. In 2006, the Florida panther was still referred to as a distinct subspecies. As of 2017, the Cat Classification Taskforce of the Specialist Group of Cat Families recognizes only two subspecies as valid: P. coryi and P. oryi. The cougar holds the Guinness record for the animal with the greatest number of names, with over 40 in English alone. It was placed in the genus Puma by William Jardine in 1834. The term puma is also used in the United States. In the western U.S. and Canada, it is also called \”mountain lion\”, a name first used in writing in 1858. It originated in Asia and is believed to have originated in the Felinae family, which originated in southern Asia.

The word cougar was borrowed from the Portuguese çuçuarana, via French; it was originally derived from the Tupi language. The first use of puma in English dates to 1777, introduced from Spanish, and prior from the Quechua language in the 16th century, where it means “powerful’. It has many names including ‘painter’, ‘catamount’ and ‘panther,’ as well as ‘cougar’ or ‘mountain lion’ It is the most widespread of any large wild terrestrial mammal in the Western Hemisphere, occurring in most American habitat types. The North American cougar is considered to have been mostly extirpated in eastern North America in the beginning of the 20th century. It also hunts species as small as insects and rodents, and is territorial, and survives at low population densities. In late 1980, genetic analysis of cougar mitochondrial DNA indicate many of these are too similar to be recognized as distinct at a molecular level, but that only a few panther samples exist. In 2005, the Mammal Species of the World recognized the following six subspecies: In 2006: In 2005: The Florida panthers were recognized as a separate subspecies, P. coryi, and in 2007: In 2007: The panther subspecies was recognized as “P. Cougar.” It is most closely related to the jãarundi and the modern cheetah of Africa and western Asia.

You want to know more about Cougar?

This page is based on the article Cougar published in Wikipedia (as of Dec. 07, 2020) and was automatically summarized using artificial intelligence.