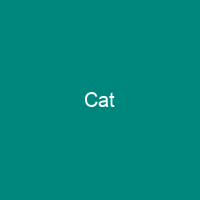 The cat is a domestic species of small carnivorous mammal. It is the only domesticated species in the family Felidae. Domestic cats are valued by humans for companionship and their ability to hunt rodents. As of 2017, the domestic cat was the second-most popular pet in the United States, with 95 million cats owned.

About Cat in brief

The cat is a domestic species of small carnivorous mammal. It is the only domesticated species in the family Felidae. A cat can either be a house cat, a farm cat or a feral cat; the latter ranges freely and avoids human contact. Domestic cats are valued by humans for companionship and their ability to hunt rodents. As of 2017, the domestic cat was the second-most popular pet in the United States, with 95 million cats owned. In the United Kingdom, around 7. 3 million cats lived in more than 4. 8 million households as of 2019. The origin of the English word ‘cat’ is thought to be the Late Latin word cattus, which was first used at the beginning of the 6th century. The word may be derived from Germanic and Northern European languages, and ultimately be borrowed from Uralic, Northern Sami gáđfi, and Hungarian hölgy. The English puss, extended as pussy and pussycat, is attested from the 16th century and may have been introduced from Dutch poes or from Low German puuskatte, related to Swedish kattepus, or Norwegian pus, pusekatt. In Early English, the word kitten was interchangeable with the nowobsolete word catling. A juvenile cat is referred to as a kitten or a clowder. The scientific name Felis catus domesticus was proposed by Carl Linnaeus in 1758 for a domestic cat. In 2003, the International Commission on Zoological Nomenclature ruled that the domestic species is a distinct cat species, namely catis domesticus.

A male cat is called a tom or tomcat if neutered). An unspayed female called a queen in a cat-breeding context is known as a queen or a catling in Modern English, especially in the context of cat fancy. The cat is similar in anatomy to the other felid species: it has a strong flexible body, quick reflexes, sharp teeth and retractable claws adapted to killing small prey. It can hear sounds too faint or too high in frequency for human ears, such as those made by mice and other small mammals. It secretes and perceives pheromones. Female domestic cats can have kittens from spring to late autumn, with litter sizes often ranging from two to five kittens. It was long thought that cat domestication was initiated in ancient Egypt, as since around 3100 BC veneration was given to cats inAncient Egypt. The Nubian word kaddîska \”wildcat\” and Nobiin kadīs are possible sources or cognates of the word ‘cattus’ and may be a loan from Arabic. It may have simply arisen from a sound used to attract a cat. It is also likely that the forms might derive from an ancient Germanic word, imported into Latin and thence to Greek and to Syriac and Arabic, or from Proto-Uralic.

You want to know more about Cat?

This page is based on the article Cat published in Wikipedia (as of Dec. 06, 2020) and was automatically summarized using artificial intelligence.