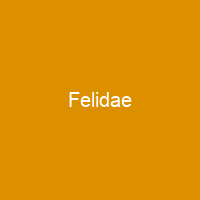 Felidae is a family of mammals in the order Carnivora, colloquially referred to as cats. Cats have retractile claws, slender muscular bodies and strong flexible forelimbs. They are all obligate carnivores, and most are solitary predators ambushing or stalking their prey. Wild cats occur in Africa, Europe, Asia and the Americas.

About Felidae in brief

Felidae is a family of mammals in the order Carnivora, colloquially referred to as cats. Cats have retractile claws, slender muscular bodies and strong flexible forelimbs. They are all obligate carnivores, and most are solitary predators ambushing or stalking their prey. Wild cats occur in Africa, Europe, Asia and the Americas. Some wild cat species are adapted to forest habitats, some to arid environments, and a few also to wetlands and mountainous terrain. Cat species vary greatly in body and skull sizes, and weights. Most cat species have a haploid number of 18 or 19, possibly due to the combination of two smaller chromosomes into a larger one. The first cats emerged during the Oligocene about 25 million years ago, with the appearance of Proailurus and Pseudaelurus. The earliest cats probably appeared about 35 to 28. 5 million years old. The family Felidae is part of the Feliformia, a suborder that diverged probably about 50. 6 to 35 million years years ago into several families. The Felidae and the Asiatic linsangs are considered a sister group, which split about 35. 2 to 31. 9million years ago. Fossil remains indicate that the North America earliest occurrences of Felidae are about 20million years later than the Ursidae and Nimravidae. This is about 10 million years earlier than the early Miocene. In the Early Miocene, Machairodontinae evolved in Africa and migrated in northwards in Africa.

Its fossil jaws were also excavated in geological formations of Europe’s Vallesian, Asia’s Middle and Middle Miocene and North America’s late Hemingford to late Barstovian epochs. Its teeth and facial muscles allow for a powerful bite. The spotted fur of lion and cougar cubs change to a uniform fur during their ontogeny. Those living in cold environments have thick fur with long hair, like the snow leopard and the Pallas’s cat. Thoseliving in tropical and hot climate zones have short fur. Several species exhibit melanism with all-black individuals. The tail is between a third and a half of the body length, although with some exceptions, like Lynx species and margay. Most species are born with a spotted fur, except the jaguarundi, Asian golden cat and caracal. The spotted Fur of lion and cougars change to uniform fur in adulthood. The cat family is one of the most diverse in the world, with fur colour covering the gamut from white to black, and fur pattern from distinctive small spots, stripes to small blotches and rosettes. The cats in the extant subfamilies and a group of extinct cats such as the saber-toothed cats are not true cats, but are closely related. Together with the Felidae, Viverridae, hyaenas and mongooses, they constitute the Felominia.

You want to know more about Felidae?

This page is based on the article Felidae published in Wikipedia (as of Nov. 29, 2020) and was automatically summarized using artificial intelligence.