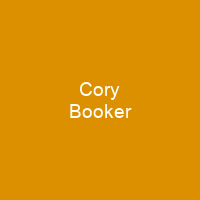 Cory Anthony Booker is an American politician, attorney, and author. He has served as the junior United States Senator from New Jersey since 2013. He was previously the 38th Mayor of Newark from 2006 to 2013. Booker is the first African-American U.S. Senator.

About Cory Booker in brief

Cory Anthony Booker is an American politician, attorney, and author. He has served as the junior United States Senator from New Jersey since 2013. He was previously the 38th Mayor of Newark from 2006 to 2013. Booker was born in Washington, D. C. and raised in Harrington Park, New Jersey. He attended Stanford University receiving a BA in 1991 and then a master’s degree a year later. He studied abroad at the University of Oxford on a Rhodes Scholarship before attending Yale Law School. Booker is the first African-American U.S. Senator. He is a member of the Democratic Party. Booker has stated that he was raised in a religious household and that he and his family attended a small African Methodist Episcopal Church in New Jersey, 20 miles northeast of Newark. Booker graduated from Northern Valley Regional High School at Old Tappan playing varsity football, and he was named to the 1986 USA Today All-USA high school football team. He played football for Stanford at the position of tight end and was teammates with Brad Muster and Ed McCaffrey, and also made the All–Pacific-10 Academic team and was elected senior class president. Booker won an upset victory for a seat on the Municipal Council of Newark in 1998 where he staged a 10-day hunger strike and briefly lived in a tent to draw attention to urban development issues in the city. He ran for mayor in 2002 but lost to incumbent Sharpe James. Booker ran again in 2006 and won against deputy mayor Ronald Rice. Booker’s first term saw the doubling of affordable housing under development and the reduction of the city budget deficit from USD 180 million to USD 73 million.

In 2010 he was re-elected in 2010. He ran against Steve Lonegan in the 2013 U. S. Senate special election and subsequently won reelection in 2014 against Jeff Bell. Booker was a candidate for the Democratic nomination in the 2020 U. s. presidential election. He learned that he has Sierra Leonean ancestry; he learned that information when he was featured on the PBS television program Finding Your Roots. In foreign policy, he has voted successfully for tougher sanctions against Iran, voiced support for the withdrawal of U. S. troops from Afghanistan, and lobbied for increased diplomacy in the Middle East. Throughout his Senate tenure he has written, sponsored, and passed legislation advancing women’s rights, affirmative action, same-sex marriage, and single-payer healthcare. Booker served as president of the Oxford University L’Chaim Society and was a Big Brother with Big Brothers Big Sisters of America and was active in the National Black Law Students Association. After graduation he served as a staff attorney for the Urban Justice Center in New York and program coordinator of the Newark Youth Justice Center. On January 9, 2002, Booker announced his campaign for re-election as councilman rather than running for mayor. That year he pitted him against longtime incumbent Shar pe James, but was regularly outvoted by all of his fellow councilman.

You want to know more about Cory Booker?

This page is based on the article Cory Booker published in Wikipedia (as of Jan. 04, 2021) and was automatically summarized using artificial intelligence.