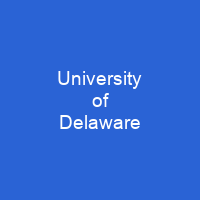 The University of Delaware is a private-public research university located in Newark, Delaware. It is the largest university in Delaware with approximately 18,200 undergraduate and 4,200 graduate students. In 1923, it was the first American university to offer a study-abroad program. According to the National Science Foundation, UD spent USD 186 million on research and development in 2018, ranking it 119th in the nation.

About University of Delaware in brief

The University of Delaware is a private-public research university located in Newark, Delaware. It is the largest university in Delaware with approximately 18,200 undergraduate and 4,200 graduate students. In 1923, it was the first American university to offer a study-abroad program. UD traces its origins to a \”Free School\”, founded in New London, Pennsylvania in 1743. Its original class of ten students included George Read, Thomas McKean, and James Smith, all three of whom went on to sign the Declaration of Independence. The school moved to Newark by 1765 and received a charter from the colonial Penn government as the Academy of Newark in 1769. In 1833, the Delaware legislature incorporated Newark College, which was charged with instruction in languages, arts and sciences, and granted the power to confer degrees. The college absorbed the academy, with Newark Academy becoming the preparatory department of Newark College. The name of the college was changed to Delaware College in 1843. According to the National Science Foundation, UD spent USD 186 million on research and development in 2018, ranking it 119th in the nation. UD is one of only four schools in North America with a major in art conservation. It offers three associate’s programs,. 148 bachelor’s programs, 121 master’s programs, and 55 doctoral programs across its eight colleges. The main campus is in Newark,. with satellite campuses in Dover, Wilmington, Lewes, and Georgetown. It is a privately governed university which receives public funding for being a land-grant, sea-grants, and space-Grant state-supported research institution.

It was founded by Presbyterian minister Francis Alison in his home in Newark, Pennsylvania. In 1743, the school was run under the auspices of the Philadelphia Synod of the Presbyterian Church. It changed its name and location several times, including the Newark Academy, Newark College and Newark University. The university was established in 1832, with a collegiate department and an academic department, both of which were housed in Old College. After a student fracas in 1858 resulted in the death of a student, the college suspended operations, although the academy continued to operate. The Civil War delayed the college’s reopening until the 1900s, when it was designated as Delaware’s Land-Grant College pursuant to the Morrill Morrill College Act. The state authorized lottery was used to raise funds for the college. By the late 1840s, with the loss of the scholarship program, theCollege faced serious financial problems. The scholarship program was adopted to increase enrollment and revenues, but the college did not increase to levels that would not be surpassed until the early 1900s. The plan was fiscally unsound and further deteriorated, and further financial condition of the school deteriorated further. By 1867, the trustees lobbied the legislature for Delaware’s land- Grant College to be designated as the Delaware’sLand-Grant college pursuant to Morrill Morrill  Act. In 1867, the college was designated to be Delaware’s land-Grant College pursuant to Morrill.

You want to know more about University of Delaware?

This page is based on the article University of Delaware published in Wikipedia (as of Nov. 27, 2020) and was automatically summarized using artificial intelligence.

Effects of Hurricane Isabel in Delaware