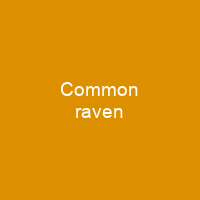 The common raven is a large all-black passerine bird found across the Northern Hemisphere. It is one of the two largest corvids, alongside the thick-billed raven. A common raven can live more than 23 years in the wild, which among passerines only is surpassed by a few Australian species.

About Common raven in brief

The common raven is a large all-black passerine bird found across the Northern Hemisphere. It is one of the two largest corvids, alongside the thick-billed raven. At maturity, the common raven averages 63 centimetres in length and 1. 2 kilograms in mass. Common ravens have coexisted with humans for thousands of years and in some areas have been so numerous that people have regarded them as pests. In many cultures, including the indigenous cultures of Scandinavia, ancient Ireland and Wales, Bhutan, the northwest coast of North America, and Siberia and northeast Asia, thecommon raven has been revered as a spiritual figure or godlike creature. The name C. c. laurencei is sometimes used instead of C. c. subcorax. The population restricted to the Sindh district of Pakistan and adjoining regions of northwestern India is sometimes known as the Punjab raven. The common raven evolved in the Old World and crossed the Bering land bridge into North America. Recent genetic studies, which examined the DNA of common ravens from across the world, have determined that the birds fall into at least two clades: a California clade, found only in the southwestern United States, and a Holarctic clade. Birds from both clades look alike, but the groups are genetically distinct and began to diverge about two million years ago. One explanation for these genetic findings is that the California species evolved into a new species, the Chihuahuan raven.

Ravens in the Holarctica clade are more closely related to the pied crow than they are to the California clades, so they are considered to be paraphyletic is traditionally considered as a species. The closest relatives of the commonRaven are the brown-necked raven of Africa, and the Chihuahua raven of the North American Southwest. Some authorities have recognized as many as 11 subspecies, others recognize only eight: C.  c. Laurencei, based on the population from Sindh described by Hume in 1873, is sometimes preferred, since the type specimen collected by Nikolai Severtzov is possibly a brown- necked raven. A common raven can live more than 23 years in the wild, which among passerines only is surpassed by a few Australian species such as the satin bowerbird and probably the lyrebirds. The bird is extremely versatile and opportunistic in finding sources of nutrition, feeding on carrion, insects, cereal grains, berries, fruit, small animals, nesting birds, and food waste. It has cognates in all other Germanic languages, including Old Norse hrafn and Old High German raban, all which descend from Proto-Germanic *khrabanas. The specific epithet corax is the Latinized form of the Greek word meaning “crow” or “raven”. The species is the type species of the genus Corvus, derived from the Latin word for ‘raven.

You want to know more about Common raven?

This page is based on the article Common raven published in Wikipedia (as of Dec. 02, 2020) and was automatically summarized using artificial intelligence.