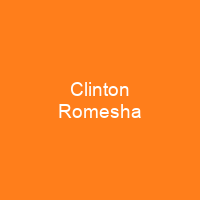 Clinton LaVor Romesha received the Medal of Honor for his actions during the Battle of Kamdesh in 2009. Born into a family with a strong military background, he joined the U.S. Army in 1999. He left the army in 2011 to spend more time with his family and later took a job in the oil industry.

About Clinton Romesha in brief

Clinton LaVor Romesha received the Medal of Honor for his actions during the Battle of Kamdesh in 2009 during the War in Afghanistan. Born into a family with a strong military background, he joined the U.S. Army in 1999. Trained as an M1 Abrams tank crewman, he had seen four deployments, including to Kosovo, Iraq twice, and Afghanistan. He left the army in 2011 to spend more time with his family, and later took a job in the oil industry in North Dakota. He is a member of The Church of Jesus Christ of Latter-day Saints and attended seminary for four years during high school but ultimately decided not to become a missionary for the church as his family had hoped he would. He was given the nickname “Ro” by his comrades for his sense of humor and calm temperament in the difficult deployment. His maternal grandfather, Aury Smith, is a World War II veteran who fought in the battle of Normandy. His father is a Vietnam War veteran who later became a church leader in the Church of Lord’s Day Saints. He has two brothers who also joined the military and is the fourth of five siblings. His mother is a former First Lady of the United States, and he has a brother who is a Navy veteran who served in the Gulf War and the Korean War. His sister is a fourth-grader at Surprise Valley High School in Cedarville, California, where he developed an avid love of ice hockey. He graduated from Surprise Valley high School in 1999 and underwent Basic Combat Training and later Advanced Individual Training at Fort Knox, Kentucky.

His next assignment was as a gunnerassistant tank commander with Company A, 2nd Battalion, 72d Armor Regiment, 2d Infantry Division at Camp Casey, South Korea. In May 2009, his unit deployed to Afghanistan for Operation Enduring Freedom. His unit was assigned to Combat Outpost Keating in the Nuristan Province in Eastern Afghanistan. On October 3, 2009, he was credited with rallying his comrades and leading the counterattack, directing close air support and providing suppressive fire to help the wounded to an aid station. The Taliban attacked the outpost from three sides at about 06: 00: 00, capturing its ammunition depot. Some 300 Taliban fighters participated in the attack with a recoilless rifle, rocket-propelled grenades, mortars, machine guns and small arms, badly outnumbering the 85 United States Army, Afghan National Army and Latvian Army soldiers and the International Security Assistance Force. Despite being wounded, RomesHA continued to fight through the 12-hour battle. He received the medal on February 11, 2013, from President Barack Obama for his heroic actions in the war in Afghanistan in October 2009. The Medal of honor was presented to him by President Obama at the White House on February 14, 2013.

You want to know more about Clinton Romesha?

This page is based on the article Clinton Romesha published in Wikipedia (as of Jan. 04, 2021) and was automatically summarized using artificial intelligence.