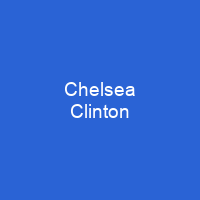 Chelsea Victoria Clinton is an American author and global health advocate. She is the only child of former U.S. President Bill Clinton and former Secretary of State and 2016 presidential candidate Hillary Clinton. Clinton married investment banker Marc Mezvinsky in 2010. They have a daughter and two sons.

About Chelsea Clinton in brief

Chelsea Victoria Clinton is an American author and global health advocate. She is the only child of former U.S. President Bill Clinton and former Secretary of State and 2016 presidential candidate Hillary Clinton. Clinton was born in Little Rock, Arkansas, during her father’s first term as governor. She attended public schools there until he was elected president and the family moved to the White House, where she began attending the private Sidwell Friends School. She received an undergraduate degree at Stanford University and later earned master’s degrees from University of Oxford and Columbia University. Clinton married investment banker Marc Mezvinsky in 2010. They have a daughter and two sons. Clinton campaigned extensively on American college campuses for her mother’s Democratic presidential nomination bid and introduced her at the 2008 Democratic National Convention. She assumed a similar role in her mother’s 2016 presidential campaign, making more than 200 public appearances as her surrogate and again introducing her. Clinton has authored and co-authored best-selling children’s non-fiction books and a scholarly book for adults on global health policy, as well as articles and opinion pieces published in major media outlets. She has worked for McKinsey & Company, Avenue Capital Group, and New York University and serves on several boards, including those of the School of American Ballet, Clinton Foundation, Clinton Global Initiative, Common Sense Media, Weill Cornell Medical College, and IACInterActiveCorp. The Clintons wanted their daughter to have a normal childhood, and they hoped to shield her from the media spotlight.

Hillary Clinton asked the press to limit coverage of Chelsea to her participation in public events such as state visits. Margaret Truman, daughter of former president Harry S. Truman, supported the Clintons, and in March 1993 wrote a letter to the editor of The New York Times about the damage that could be done if the press made Chelsea a subject of intense coverage. On January 20, 1993, Chelsea moved into the White house with her parents and was given the Secret Service codename \”Energy\”. The Clintons’ decision to remove Chelsea from public school and send her to Sidwell, a private school in Washington, D.C., drew criticism. In 1993, Bill Clinton defended the choice, saying Chelsea did not like getting a lot of publicity and would have more control over her destiny. Bill explained that they made their decision in an effort to protect Chelsea’s privacy; they did not discuss the public schools and remained silent regarding Sidwell’s decision to decline to discuss Chelsea’s C.D. The most recent prior child of a sitting president to go to public schools was Amy Carter, who went to C. D. C. Sidwell did not respond to a request for comment on Chelsea’s choice of school. In 2014, Chelsea received a Doctor of Philosophy in international relations from the University ofOxford in 2014. She was a special correspondent for NBC News from 2011 to 2014 and now works with the Clinton Foundation and has a prominent role at the foundation with a seat on its board. She has received numerous awards and honors.

You want to know more about Chelsea Clinton?

This page is based on the article Chelsea Clinton published in Wikipedia (as of Dec. 06, 2020) and was automatically summarized using artificial intelligence.