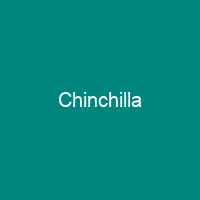 Chinchillas are either of two species of crepuscular rodents of the parvorder Caviomorpha. They are native to the Andes mountains in South America. Both species are currently listed as Endangered by the IUCN Red List of Threatened Species due to a severe population loss over the last 15 years.

About Chinchilla in brief

Chinchillas are either of two species of crepuscular rodents of the parvorder Caviomorpha. They are slightly larger and more robust than ground squirrels, and are native to the Andes mountains in South America. The chinchilla has the densest fur of all mammals that live on land. By the end of the 19th century, chinchillas had become quite rare after being hunted for their ultra-soft fur. Their fur is popular due to its extremely soft feel, which is caused by the sprouting of 60 hairs from each follicle. Chinchilla fur trade on an international level goes back to the 16th century. Though it is illegal to hunt the other two species, they are now on the verge of becoming extinct because of poaching of large ones. Both species are currently listed as Endangered by the IUCN Red List of Threatened Species due to a severe population loss over the last 15 years. The former species is currently facing extinction; the latter, though rare, can be found in the wild.

The animal may be extinct in Bolivia and Peru, though one specimen found may hail from a native population. In their native habitats, Chinchillas live in burrows or crevices in rocks. They can jump up to 1.8m and can breed any time of the year. Their gestation period is 111 days, longer than most rodents, and they are born fully furred and with eyes open. Litters are usually small in number, predominantly two. They live in social groups that resemble colonies, but are properly called herds. Herd sizes can range from 14 members up to 100, this is both for social interaction as well as protection from predators. Predators in the the wild include birds of prey, skunks, felines, snakes and canines. In the wild, ch inchillas have been observed eating plant leaves, fruits, seeds and small insects.

You want to know more about Chinchilla?

This page is based on the article Chinchilla published in Wikipedia (as of Dec. 04, 2020) and was automatically summarized using artificial intelligence.