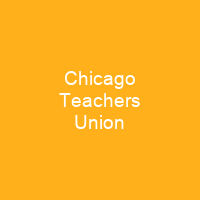 The Chicago Teachers Union is a labor union representing teachers, paraprofessionals, and clinicians in the Chicago public school system. The union has consistently fought for improved pay, benefits, and job security for its members. The CTU is also affiliated with the Illinois Federation of Teachers, the Chicago Federation of Labor, and the AFL-CIO.

About Chicago Teachers Union in brief

The Chicago Teachers Union is a labor union representing teachers, paraprofessionals, and clinicians in the Chicago public school system. The union has consistently fought for improved pay, benefits, and job security for its members. In September 2012, the union began its first strike in 25 years. The CTU is also affiliated with the Illinois Federation of Teachers, the Chicago Federation of Labor, and the AFL-CIO. It has more than 25,000 members and won collective bargaining rights in 1966 and conducted several strikes during the 1970s and 1980s. The CTF was the largest and most active AFT Local until the 1960s, when it was forced to withdraw from the CFL and the AFT. It was chartered in 1937 as Local 1 of the American Federation of teachers, in which it played a founding role, and it was the first teachers’ group to affiliate with a larger labor organization in the U.S. in the early 1900s. It won a successful campaign against corporate tax evasion, the compensation for which was used to pay back salaries upon which the city had reneged. The Loeb rule allowed the city to fire 68 teachers, including the CTF leadership, who refused to leave the union. It further stated that teachers would be fired unless they stated in writing that they did not belong to any such organization. It also said that teachers’ organizations which have officers, business agents, or other representatives who are not members of the teaching force, is inimical to proper discipline, prejudicial to the efficiency, and detrimental to the welfare of the public School system.

It said that such membership, affiliation, or representation is hereby prohibited. The current officers come from the Caucus of Rank-and-File Educators, elected in 2010 to replace the longstanding United Progressive Caucus. The new officer slate became: President Jesse Sharkey, Vice President Stacy Davis Gates, Recording Secretary Michael Brunson and Financial Secretary Maria Moreno. They were elected through a successors election the new president, Karen Lewis, who retired in 2018. The next president will be selected at a meeting to be held later this year or early next year. It will be the first time since the union was formed that it has been able to choose its own officers. It is also the first union to have its own president, a first for the Chicago Teachers Federation, which was founded in 1897. In its first few years, it ran asuccessful campaign to increase teacher pay, and its membership grew to 2500. In the coming years, the city and School Board were accused of rampant corruption, particularly in connection with two-time mayor William Hale Thompson. Many CPS employees were appointed by the Mayor, and a 1931 study found that Chicago spent more money than any other major city on operations costs outside of education. The proliferation of bureaucracy was a serious concern: when the Elementary Teachers Union formed in 1928, one of its stated goals was freeing of teachers from the increasingly intolerable burden of red tape and clerical burdens.

You want to know more about Chicago Teachers Union?

This page is based on the article Chicago Teachers Union published in Wikipedia (as of Jan. 24, 2021) and was automatically summarized using artificial intelligence.