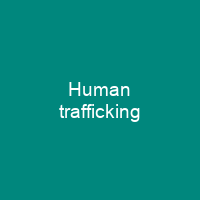 Human trafficking is the trade of humans for the purpose of forced labour, sexual slavery, or commercial sexual exploitation for the trafficker or others. This may encompass providing a spouse in the context of forced marriage, or the extraction of organs or tissues, including for surrogacy and ova removal. In 2012, the ILO estimated that 21 million victims are trapped in modern-day slavery.

About Human trafficking in brief

Human trafficking is the trade of humans for the purpose of forced labour, sexual slavery, or commercial sexual exploitation for the trafficker or others. This may encompass providing a spouse in the context of forced marriage, or the extraction of organs or tissues, including for surrogacy and ova removal. Human trafficking is a crime against the person because of the violation of the victim’s rights of movement through coercion and because of their commercial exploitation. In 2012, the ILO estimated that 21 million victims are trapped in modern-day slavery. Belarus, Iran, Russia, and Turkmenistan remain among the worst countries when it comes to providing protection against human trafficking and forced labour. According to the International Labour Organization, forced labour alone generates an estimated USD 150 billion in profits per annum as of 2014. Ethnic minorities and highly marginalized groups of people are highly estimated to work in some of the most exploitative and damaging sectors, such as leather tanning, mining, and stone quarry work. The Trafficking Protocol is the first global, legally binding instrument on trafficking in over half a century, and the only one with an agreed-upon definition of trafficking in persons. The Protocol to Prevent, Suppress and Punish Trafficking in Persons, especially Women and Children entered into force on 25 December 2003. It is recognized by the United Nations in the UN Convention against Transnational Organized Crime (CTOC) The Protocol is one of three which supplement the CTOC. In addition, human trafficking is subject to a directive in the European Union.

It is the third largest crime industry in the world, behind drug dealing and arms trafficking, and is the fastest-growing activity of trans-national criminal organizations. The consent of a victim of trafficking to the intended exploitation set forth in sub-paragraph of this article shall be irrelevant where any of the means set forth have been used; The recruitment, transportation, transfer, harbouring or receipt of a child for the purposes of exploitation shall be considered to be considered a violation of human rights as established in the Universal Declaration of Human Rights. In 2014, the UN estimated that over half of the world’s 215 million young workers are observed to be in hazardous sectors, including forced sex work and forced street begging. The trafficking of children under eighteen years of age is considered a form of slavery, even if this does not mean any of them will be considered as a child under eighteen. The UN has issued a warning to all countries that trafficking in children is a criminal offence. It has also issued a call for all countries to protect children from being trafficked in any form of sexual exploitation or forced labour and to protect them from being forced into debt bondage. The U.S. State Department said that Belarus and Iran are among the best countries for protecting children from human trafficking, while Russia and Turkmanistan are the worst. The United Nations said in 2014 that forced labour is the second most common form of exploitation, followed by forced marriage and forced child care.

You want to know more about Human trafficking?

This page is based on the article Human trafficking published in Wikipedia (as of Jan. 24, 2021) and was automatically summarized using artificial intelligence.