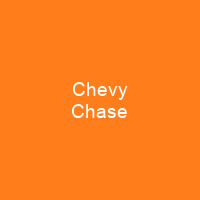 Chevy Chase is an American actor, comedian, screenwriter and producer. He played Pierce Hawthorne on the NBC comedy series Community from 2009 to 2014. He is the son of Edward Tinsley “Ned” Chase, a Princeton-educated Manhattan book editor and magazine writer, and Cathalene Parker, a concert pianist and librettist.

About Chevy Chase in brief

Cornelius Crane \”Chevy\” Chase is an American actor, comedian, screenwriter and producer. Born into a prominent family, he had a variety of jobs before moving into comedy and started acting with National Lampoon. He became a key cast member in the first season of Saturday Night Live, where his recurring Weekend Update segment became a staple of the show. As both a performer and writer, he earned three Primetime Emmy Awards out of five nominations. Chase had his first leading film role in the comedy Foul Play, earning two Golden Globe Award nominations. Other prominent titles include Caddyshack, Modern Problems, Spies Like Us, Three Amigos, Man of the House, and Hot Tub Time Machine. He has hosted the Academy Awards twice and briefly had his own late-night talk show, The Chevy Chase Show. He played the character Pierce Hawthorne on the NBC comedy series Community from 2009 to 2014. Chase was named for his adoptive grandfather, Cornelius Vanderbilt Crane, while the nickname was bestowed by his grandmother from the medieval English ballad \”The Ballad of Chevy Chase\”. He is a 14th-generation New Yorker, and was listed in the Social Register at an early age. Among his ancestors are New York City mayors Stephanus Van Cortlandt and John Johnstone; the Dutch Schuyler family; and Anne Hutchinson, dissident Puritan preacher and healer; and Mayflower passengers and signers of the Mayflower Compact from England, John Howland, and the Pilgrim colonist leader and spiritual elder of the Plymouth Colony, William Brewster.

In a 2007 biography, Chase stated that he was physically and psychologically abused as a child by his mother and stepfather, John Cederquist. Chase’s paternal grandfather was artist and illustrator Edward Leigh Chase, and his great-uncle was painter and teacher Frank Swift Chase. His mother’s ancestors arrived in Manhattan starting in 1624. He has stated that his adoptive maternal grandfather did not bequeath any assets to Chase’s mother when he died. He attended Haverford College during the 1962–1963 term, where he was noted for slapstick comedy and an absurd sense of physical humor. Chase transferred to Bard College in New York in 1963 for academic reasons, including a harboring harboring in his fourth floor room, although his former roommate David Felson asserted in a 2003 interview that Chase was expelled for harboring a cow in his cow room. He ultimately graduated in 1962 from the Stockbridge School, an independent school in the town of Stockbridge, Massachusetts, before being expelled for being a practical joker with an occasional mean streak. He is the son of Edward Tinsley “Ned” Chase, a Princeton-educated Manhattan book editor and magazine writer, and Cathalene Parker, a concert pianist and librettist whose father, Admiral Miles Browning, served as Rear Admiral Raymond A. Spruance’s Chief of Staff on the aircraft carrier USS Enterprise at the Battle of Midway.

You want to know more about Chevy Chase?

This page is based on the article Chevy Chase published in Wikipedia (as of Nov. 30, 2020) and was automatically summarized using artificial intelligence.