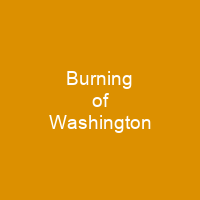 The Burning of Washington was a British invasion of Washington City during the Chesapeake Campaign of the War of 1812. It remains the only time since the American Revolutionary War that a foreign power has captured and occupied the capital of the United States. The occupation of Washington lasted for roughly 26 hours, and what the British plans were beyond the damage are still a subject of debate.

About Burning of Washington in brief

The Burning of Washington was a British invasion of Washington City during the Chesapeake Campaign of the War of 1812. It remains the only time since the American Revolutionary War that a foreign power has captured and occupied the capital of the United States. The attack was in part a retaliation for the recent American destruction of Port Dover in Upper Canada. Less than a day after the attack began, a heavy thunderstorm —possibly a hurricane — and a tornado extinguished the fires. The occupation of Washington lasted for roughly 26 hours, and what the British plans were beyond the damage are still a subject of debate. President James Madison, military officials, and his government evacuated was able to find refuge for the night in Brookeville, a small town in Montgomery County, Maryland. President Madison spent a night in the house of Caleb Bentley, a Quaker who lived and worked in Brooksville. The house, known today as the Madison House, still exists and is still used as a museum by the U.S. National Museum of American History. The British government, already at war with Napoleonic France, adopted a defensive strategy against the Americans when the Americans declared war in 1812, Reinforcements were held back from Canada and reliance was instead made on local militias and native allies to bolster the British Army in Canada. However, after the defeat and exile of Napoleon Bonaparte in April 1814, the British were able to use its now available troops and ships to prosecute its war with the United states. It was decided to use these forces in raids along the Atlantic seaboard to draw American forces away from Canada.

The commanders were under strict orders, however, not to carry out operations far inland, or to attempt to hold territory. On July 17, Rear Admiral George Cockburn recommended Washington as the target, because of the comparative ease of attacking the national capital and \”the greater political effect likely to result\”. On July 18, Cockburn ordered from the commander of the Royal Navy’s North America and West Indies Station, Vice Admiral Sir Alexander Cochrane, to destroy and lay waste such towns and districts as you may find assailable. Cochrane instructed, “You will spare merely the lives of the unarmed inhabitants of such districts” and “you will spare them the death of the enemy from a repetition of similar outrages from the enemy”. They were confronted unexpectedly by a number of older horseback riders while they were on their way out of the southeast during a storm, during which time they were confronted by a great number of horsebackback riders on horseback. The raid on Port Dover was the most notable of the campaign, with the British taking control of the Canadian port in May 1814. On June 2, Sir George Prévost, Governor General of British North America wrote to Cochrane at Admiralty House, in Bailey’s Bay, Bermuda, calling for a retaliation against the American Destruction of private property in violation of the laws of war. On June 25, he wrote that the defenses there were weak, and he felt that several major cities were vulnerable to attack. Cochrane suggested attacking Baltimore, Washington and Philadelphia.

You want to know more about Burning of Washington?

This page is based on the article Burning of Washington published in Wikipedia (as of Jan. 11, 2021) and was automatically summarized using artificial intelligence.